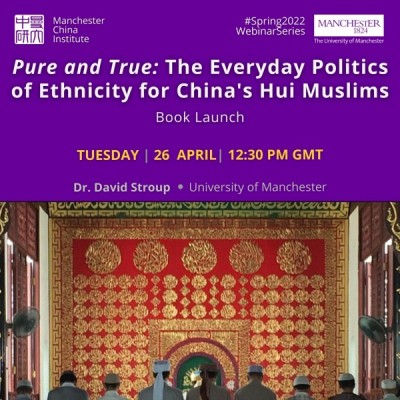 On Tuesday, 26 April 2022, the School of Social Sciences and the Manchester China Institute celebrate the launch of ‘Pure and True: the everyday politics for China’s Hui Muslims’ the new book from Lecturer in Chinese Politics, David R. Stroup.

In his new publication, Dr Stroup asks why doesn’t conflict plague relationships between the Hui and the State? And how do they navigate their ethnicity in a political climate that is increasingly hostile to Muslims? Drawing on interviews with ordinary urban Hui, the book develops a distinctive account of how the boundaries of Hui identity is contested between groups of Hui rather than between the Hui and the State. By channelling contentious politics towards internal boundaries, the state is able to exert control.

David Stroup is a Lecturer of Chinese Politics at the University of Manchester. He received his doctorate from the University of Oklahoma in August 2017. His current research, drawing on ethnographic and interview gathered over the course of a year in China on Fulbright Research grant, focuses on how the renegotiation of ethnic boundaries in ethnic Hui Muslim communities in the context of urbanization interacts with China’s state policies on ethnic and religious identification.

Registration is free, via Eventbrite