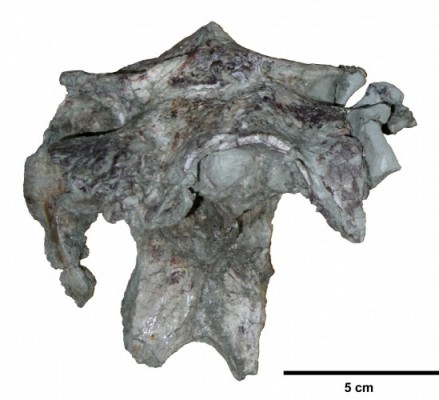 Experts have described one of the most complete sauropod dinosaur braincases ever found in Europe. The find could help scientists uncover some of the mysteries of how dinosaur brains operated, including their intellectual and sensory abilities.

The team have digitally reconstructed the cavity where the brain lay, the passages of the cranial nerves and certain blood vessels as well as the labyrinth of the inner ear.

In a paper published today in the journal PLOS ONE, the team led by a senior research fellow from The University of Manchester, describes the rare find. Skulls, and particularly the braincases, are very fragile so not many have survived. That is not the case with this find, which is remarkably complete.

The skull, from a titanosaur, a type of sauropod, was found at a dig site in eastern Spain in 2007 and experts have spent the last few years studying it to see what secrets it may reveal.

Currently we know very little about the brain of dinosaurs. Research such as this is fundamental if we want to get an idea about the cognitive skills of these animals or if they had keen hearing or good eyesight and plenty of other information

Lead author of the paper Dr Fabien Knoll, of The University of Manchester, said: “This is such a rare finding that is why it is so exciting. Usually we find vertebrae or other bones, very rarely the braincase and this one is complete. I was present on the dig site when it was uncovered and it was a very special moment.

“Currently we know very little about the brain of dinosaurs. Research such as this is fundamental if we want to get an idea about the cognitive skills of these animals or if they had keen hearing or good eyesight and plenty of other information.”

The titanosaur lived about 72 million years ago. Like all sauropods it was four-legged with a long neck and a long tail and herbivorous. It was a distant relative of Diplodocus but, with about 14m in length, was only half its size. The study shows that its brain fitted in a diminutive cavity of only 6.3 cm in length.

Dr Knoll, who made the first digital reconstruction of a dinosaur endocranial cavity in the late 1990s, said: “In a few years’ time if more finds like this come to light and, above all, if they are studied with the modern imaging technologies then we could really start to understand more about dinosaur brains.”