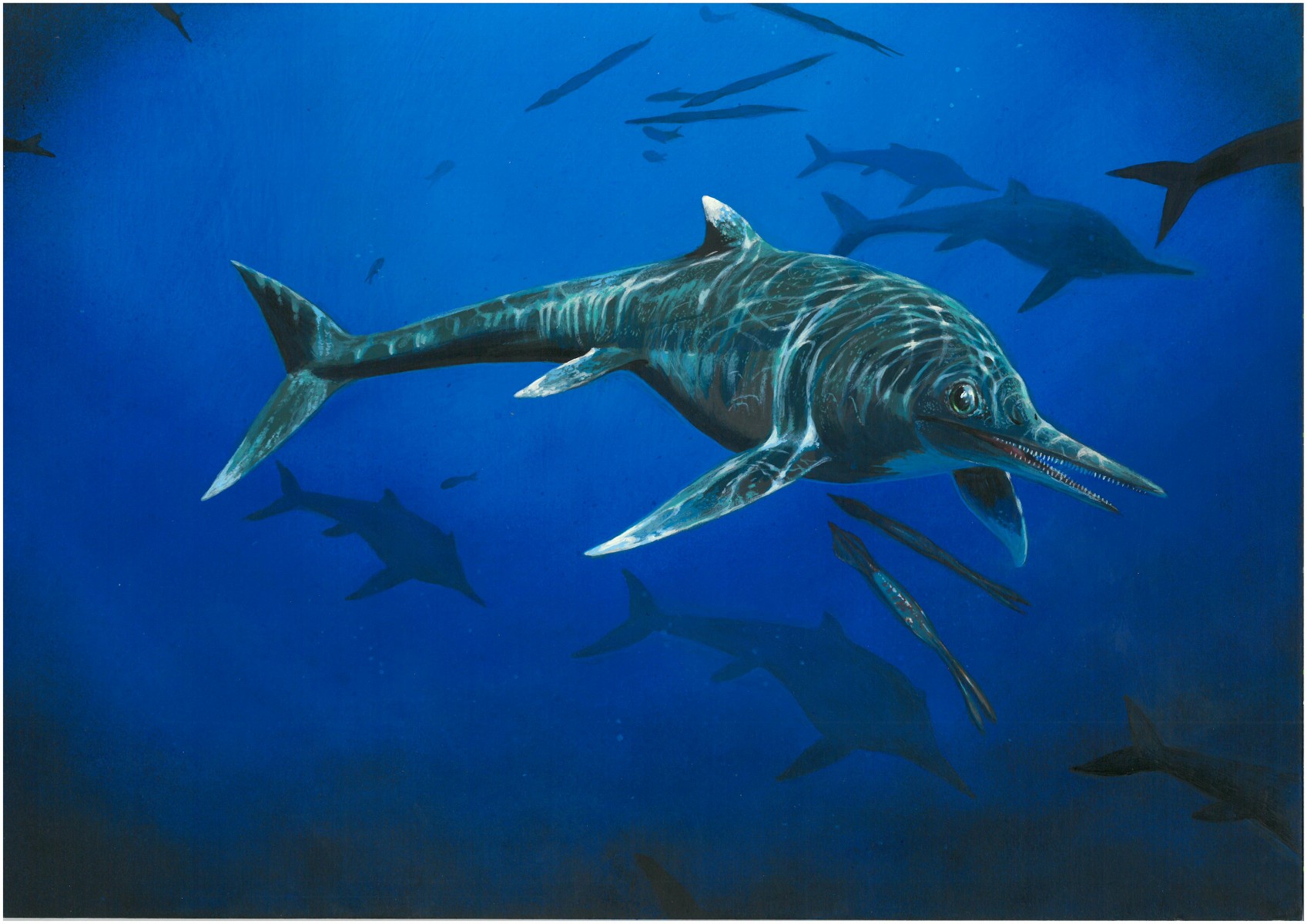 A rare 200 million-year-old ichthyosaur specimen has been discovered in a private collection 22 years after it was originally found.

The fossil is only the second example of Wahlisaurus massarae, a new species of ichthyosaur discovered by The University of Manchester palaeontologist, Dean Lomax. This fossil was originally found in 1996 and has now been donated to a museum.

Ichthyosaurs have recently been in the limelight as the focus of BBC One documentary, ‘Attenborough and the Sea Dragon’. They were a type of sea-going reptile that lived during the time of the dinosaurs. Their fossils are plentiful in the UK and in recent years Lomax has described five different species of the prehistoric reptile.

In 2016, Lomax described an ichthyosaur skeleton that he had examined in the collections of Leicester’s New Walk Museum and Art Gallery. He spotted several unusual features of the bones and determined that the features were unique and represented a new species, which he called Wahlisaurus massarae, in honour of two of his colleagues and mentors: Bill Wahl and Prof. Judy Massare.

He said: “When Wahlisaurus was announced, I was a little nervous about what other palaeontologists would make of it, considering the new species was known only from a single specimen. As a scientist you learn to question almost everything, and be as critical as you can be. My analysis suggested it was something new, but some palaeontologists questioned this and said it was just ‘variation’ of an existing species.”

Rare ichthyosaur is only second known example In this new study, Lomax teamed up with Dr Mark Evans, palaeontologist and curator at the New Walk Museum, Leicester, and fossil collector, Simon Carpenter, of Somerset. 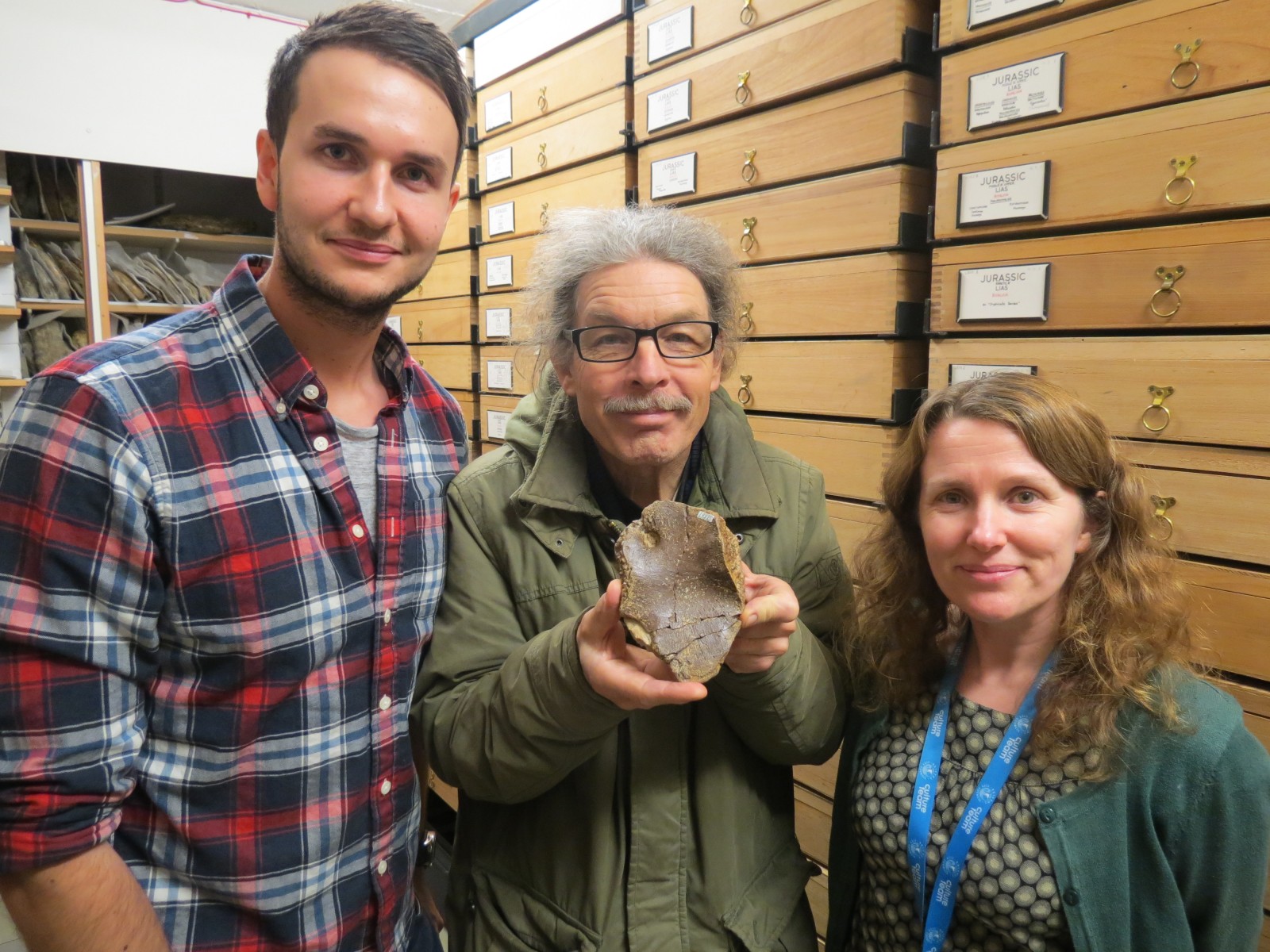 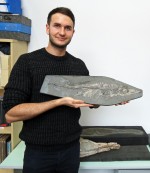 As a scientist you learn to question almost everything, and be as critical as you can be. My analysis suggested it was something new, but some palaeontologists questioned this and said it was just ‘variation’ of an existing species.

The study focuses on a specimen Dean identified in Simon’s collection, which is an almost complete coracoid bone (part of the pectoral girdle) that has exactly the same unique features of the same bone in Wahlisaurus. The specimen was originally collected in 1996, in a quarry in northern Somerset. Once the specimen’s rarity was realised, Simon immediately donated it to Bristol Museum and Art Gallery.

Lomax added: “You can only imagine my sheer excitement to find a specimen of Wahlisaurus in Simon’s collection. It was such a wonderful moment. When you have just one specimen, ‘variation’ can be called upon, but when you double the number of specimens you have it gives even more credibility to your research.”

The new discovery is from a time known as the Triassic-Jurassic boundary, right after a world-wide mass extinction. For these reasons, the team have been unable to determine exactly whether the ichthyosaur was latest Triassic or earliest Jurassic in age, although it is roughly 200 million-year-old.

As part of the study, Dr Evans cleaned the bones and removed additional rock from the first specimen. This assisted in a detailed re-examination of the original skull, which led to the discovery of additional bones. This has provided a better understanding of the skull structure.

“The discovery of the new specimen in a private collection helps to recognise the important contribution of dedicated and responsible fossil collectors. I am especially grateful to Simon for donating the specimen and collecting all of the data available with the specimen when he found it.” Added Lomax.

The new study has been published today in the scientific journal, Geological Journal.