TICKETS SOLD OUT: On 8 November 2022, presented by Creative Manchester and the John Rylands Research Institute and Library, renowned DJ, Graeme Park, will discuss the revival of rave with sociologists from The University of Manchester. 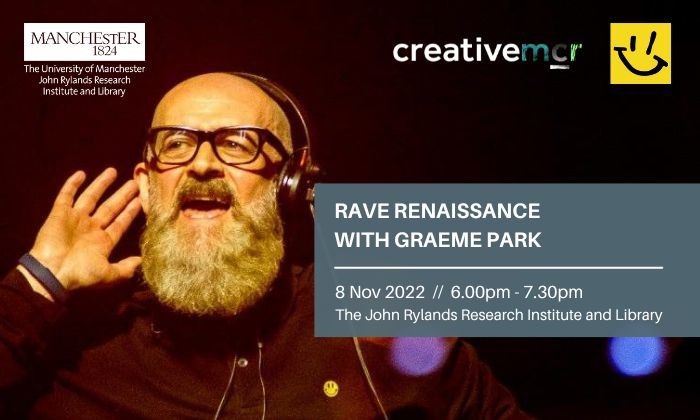 Manchester has long been renowned for its rich musical history and nightlife, commonly regarded as a clubbing capital of the world and once home of the legendary Haçienda club. It was during his time DJ’ing at The Haçienda club that Graeme Park became credited as one of the founders of the UK’s rave scene.

Now a Senior Lecturer in Sound and Music Technology at Wrexham-Glyndwr University, and combined with his industry knowledge, Graeme will be in discussion with The University of Manchester sociologists, Dr Helen Holmes and Professor Nick Crossley, about their collective project exploring the revival of rave and its importance as part of both musical and urban heritage. The three will draw from interviews with rave fans and music professionals to highlight how rave has evolved from its heyday in the nineties to what keeps it thriving today, and those in attendance will be offered the opportunity to ask questions about the research and Graeme’s role in rave’s revival during a short Q&A.

This event ties into the John Rylands Research Institute and Library’s British Pop Archive, the first specifically designated national popular culture archive in the UK. Based at the John Rylands Research Institute and Library, it aims to celebrate and preserve the records of British popular culture, such as popular music, recognising its pivotal influence on the world stage.