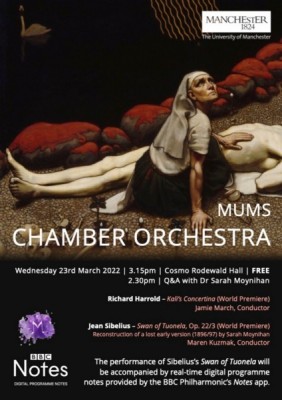 A lost early version of Jean Sibelius’s tone poem, The Swan of Tuonela, has been reconstructed by Dr Sarah Moynihan. It was performed for the first time by MUMS Chamber Orchestra at the Martin Harris Centre on Wednesday 23rd March 2022, conducted by Maren Kuzmak.

The Swan of Tuonela is one of four tone poems in Jean Sibelius’s symphonic suite, Lemminkäinen: Four Legends from The Kalevala, Op. 22. The work was completed by early spring of 1896, but after negative reviews following its premiere, Sibelius revised the whole work twice and reversed the order of its inner movements.

Among other amendments, he shortened The Swan by a fourth of its length. Though early versions of the other three tone poems in the suite have been reconstructed, performed, and recorded, the first versions of the Swan were thought to be entirely destroyed during an RAF bombing raid in Leipzig (1943).

In 2013, however, editors of Sibelius’s complete works made an exciting discovery: two early Violin I parts for the Swan were found in the Helsinki Philharmonic Archives. These contain passages later omitted from the final version and many annotations. Moynihan’s analytically informed reconstruction takes the surviving Violin I parts as the harmonic and textural basis for what is, in equal part, a posthumous collaboration and orchestral reimagining.

The recent performance was accompanied by synchronised digital programme notes sent to audience members’ phones via the BBC Philharmonic’s innovative Notes web app: a particularly useful tool for drawing attention to the variation between Moynihan’s reconstruction and Sibelius’s final version of the work.