Reflections on CBS trip to Greece

Justin Daneshmand reflects on the trip to Greece enjoyed by members of the Centre for Biblical Studies last summer. 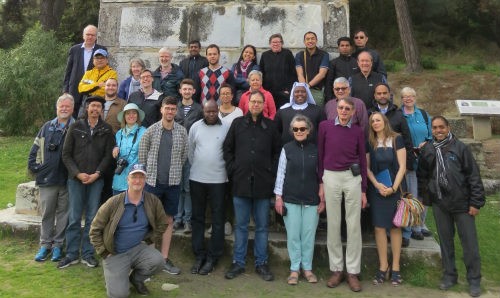 Members of the Centre for Biblical Studies had the opportunity to participate in an academic study trip to Northern Greece.

The group also included faculty and postgraduate research students from two other universities (Liverpool Hope and KU Leuven), and some independent researchers.

We had the wonderful opportunity to visit archaeological sites, old ruins, ancient churches, and a number of museums.

The trip afforded us personal exposure and teachings in situ. It was incredibly enriching for our understandings of ancient Greek, Roman, Jewish, and Christian contexts.

We arrived in Thessaloniki and spent the first three nights there, then Thasos the following two, and finally Thessaloniki again for the remaining four days.

Breakfasts and dinners were included, affording us the opportunity to enjoy authentic and delicious Greek cuisine.

Every day we had breaks for coffee/snacks, lunch, and other free time to explore.

Nothing, in particular, was scheduled for our first day upon arrival, which allowed participants to explore the city and visit some suggested locations, such as the Jewish Museum, Hagia Sophia Church, or Church of the 12 Apostles.

On the second day, we visited Hagios Demetrios basilica, the Roman Forum and museum, the Archaeological Museum of Thessaloniki, and then an academic session at the Aristotle University of Thessaloniki on "Women Deacons in Early Christianity".

We travelled on the third day to Veria (Beroia) and visited the Archaeological Museum there, then visited the Lefkopetra temple of the Mother of Gods, and afterwards went to Vergina (The Royal Tombs Museum).

Destined for Thasos on the fourth day, we saw Amphipolis and Kavala (ancient Neapolis, the main seaport of eastern Macedonia) along with their museums as well as Keramoti before taking a ferry to the island.

The following day we attended the Archaeological Museum before walking around the Ancient Agora and then hiking up to the Acropolis of Thasos.

We even had time to see Aliki (ancient marble quarries) and return with the opportunity to go swimming just off the shore of our hotel and resort!

On the sixth day, we returned to the mainland and spent the day at the ancient Roman colony of Philippi (site and museum) where Prof Peter Oakes gave short presentations on particular archaeological artefacts relating to his research.

On Sunday, after attending the Greek Orthodox Palm Sunday Liturgy (Hagia Sophia Church in Thessaloniki) we voyaged to Pella for the archaeological site and museum.

The following day we saw the site of Dion and its museum, returning to for a presentation by Dr Ekaterini Tsalampouni on "Women in the Orthodox Church" at the Aristotle University of Thessaloniki.

On the last day for scheduled events, we walked up to the City Walls, visited the Vlatadon Monastery, and saw the Museum of Byzantine Culture in Thessaloniki.

After a lovely farewell lunch participants began to depart or explore the city before leaving the next day.

Our trip to Northern Greece was a memorable and educational experience!