A life-story which took one 12-year-old refugee on an inspirational solo journey from war-torn Afghanistan to graduation in Manchester was retold on Wednesday as Gulwali Passarlay delivered the University’s annual Foundation Day lecture. 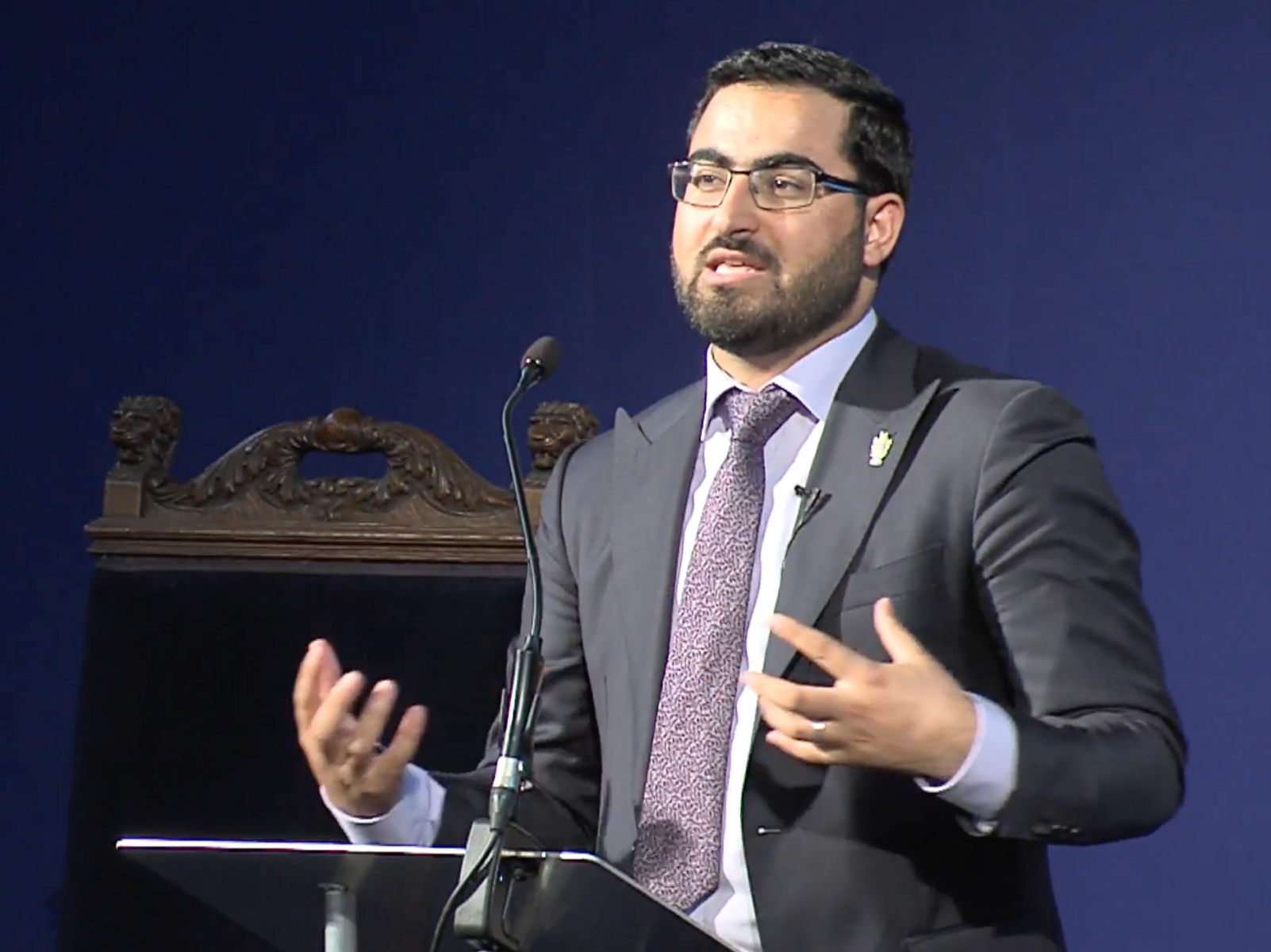 Gulwali, who is the author of the best-selling book, the Lightless Sky, spoke about his journey in ‘From a war zone to the lecture theatre’ as part of a programme of celebrations and honorary graduations to mark the foundation of The University of Manchester.

In his lecture, Gulwali detailed how, as a 12-year-old about to be forced to join the Taliban or the NATO-backed army, he endured an unimaginably difficult year of solitary hardship on the road.

His journey forced him to contend with hunger, illness, a terrifying 50-hour sea crossing in darkness with 100 other refugees, and a motorway journey clinging to a hot engine inside a lorry.

Arriving in the UK, he taught himself English and eventually enrolled on the Manchester Access Programme which helped him to gain a place on a BA in Social Sciences (Politics), from which he graduated in December 2016. Since then he has continued to work as a fervent advocate for many social justice issues and causes.

Gulwali said: “I am truly honoured and privileged to have this enormous opportunity to give the Foundation Day Lecture. The University and Manchester have welcomed me with open arms and hearts and I want to give back through advocacy, activism and campaigning for social justice, human rights and education.

“I greatly enjoyed meeting the people who support those like me who attend university because of programmes like MAP.”

This year, four of these were awarded.

Nazir Afzal OBE, was Chief Crown Prosecutor for the North West of England and formerly Director in London. Most recently, he was Chief Executive of the country’s Police & Crime Commissioners. During a 24 year career, he led nationally on several legal topics including Violence against Women & Girls, child sexual abuse, and honour based violence and had responsibility for more than 100,000 prosecutions each year.

His prosecutions of the so-called ‘Rochdale grooming gang’, BBC presenter Stuart Hall and hundreds of others were ground-breaking and drove the work that has changed the landscape of child protection. Since stepping down, he has become an international expert on extremism and radicalisation and also holds an honorary position in the University’s School of Law.

The acclaimed BBC film, Three Girls, was based on his Rochdale case and he is also the only lawyer to ever prosecute a case before the Queen.

Professor Dame Janet Finch is a social scientist who has spent her professional career in universities, and latterly in non-executive roles in public service and the not-for-profit sector. She has occupied a variety of leadership roles in the university sector, and was Vice-Chancellor of Keele University (1995-2010).

Her academic discipline is sociology; she has researched and published widely on the topic of family relationships in particular. She has also provided academic leadership nationally in a number of roles related to research policy and funding.

She was awarded a CBE in 1999, and a DBE in 2008, for services to social science and higher education.

Dr Eli Harari received his BSc (Hons) in Physics from The University of Manchester in 1969 and his PhD in Solid State Sciences from Princeton University in 1973.

In 1976 he invented the practical floating gate EEPROM. This led to the publication in 1978 of his research work which is the foundational physics for today’s Flash memory.

In 1988 he founded SunDisk (later renamed SanDisk) where he served as CEO and Chairman until his retirement in 2010.

At SanDisk he drove the industry-wide adoption of the System-Flash invention that is at the heart of today’s memory cards, USB flash drives, solid state drives, and the flash storage in every smartphone.

He is the inventor or co-inventor of 180 patents and was inducted into the American National Inventors Hall of Fame. Among numerous awards and honours, he is a recipient of the US 2012 National Medal of Technology and Innovation.

Artist Cornelia Parker OBE is internationally renowned for her sculpture and installations. Parker’s work is concerned with formalising things beyond our control, containing the volatile and transforming it into something that is quiet, contemplative and often tragi-comic. Some of her most noted works include The Distance (A Kiss with String Attached) (2003), The Maybe, in collaboration with Tilda Swinton (1995), and Cold Dark Matter: An Exploded View (1988-9).

She was nominated for the Turner Prize in 1997, elected as a Royal Academician in 2009 and appointed an Officer of the Order of the British Empire (OBE) in 2010.

She is currently an Honorary Professor at The University of Manchester, Honorary Fellow of Queen Elizabeth Hall, Oxford and she was the Official Election Artist for 2017.

Our speaker, Gulwali, has a remarkable story of determination to tell and I’m sure his words will help to inspire others to similar levels of success

Professor Dame Nancy Rothwell, President and Vice-Chancellor of The University of Manchester, said: “On the University’s Foundation Day it was an honour to award degrees to four outstanding people who have achieved so much in their own fields.

“Our speaker, Gulwali, has a remarkable story of determination to tell and I’m sure his words will help to inspire others to similar levels of success.”

You can read a blog written by Gulwali Passarlay earlier this year on the Policy@Manchester site.

This lecture coincides with Manchester Migration Month - a series of events, activities, blogs and features in October to explore migration's relationship with inequalities, social justice, belonging and Brexit.