Lecturer in Peace and Conflict Studies, Catherine Arthur, focuses her research on symbols and nationalism in post-conflict reconstruction and nation-building.

In an interview with HCRI, Catherine Arthur talks about her three-month field research in Timor-Leste, the importance of street art in peacebuilding, and the role of symbols in contexts of peace and conflict.

To learn more about the history of Timor-Leste, scroll to the bottom of the page before reading the full interview.

How did your research interest in Timor-Leste and their use of political symbols develop?

The focus on identity and symbols came from growing up and living in Northern Ireland. Flags, murals, and identity symbols are essential in everyday life and politics, and the symbolic aspect of life is often very problematic and contentious. However, it is also really emotive and powerful, and that has always been fascinating to me. For my PhD and my research on national identity and political symbols, I understood symbols to be the physical objects that represent identity and national heroes to be the embodiments, the personification of national identity. I also looked at murals and street art, which are a less formalised symbolic representation of identity. In Timor, there were flags everywhere, too, so for my thesis, I looked mainly at flags, monuments, memorials, national heroes, and street art.

Timor-Leste is incredibly young as a nation-state. Because of the legacies of colonialism and violence, there are an awful lot of issues going on that still affect society and politics, and the complexity of post-independence politics is visible everywhere. For example, the number of flags – every political party in Timor has its own flag, and there are approximately 29 political parties for a population of 1.5 million people. Many of the flags have some type of important symbolism that can be reflective of indigenous identity and spirituality, new democratic and liberal ideals, or the more revolutionary leftist politics that was associated with the independence movement under Indonesia.

Personality politics is also central to life in the post-independence state and made powerful by the heroism linked to the leaders of the independence movement throughout the Indonesian occupation and those who fought against the Portuguese for independence. 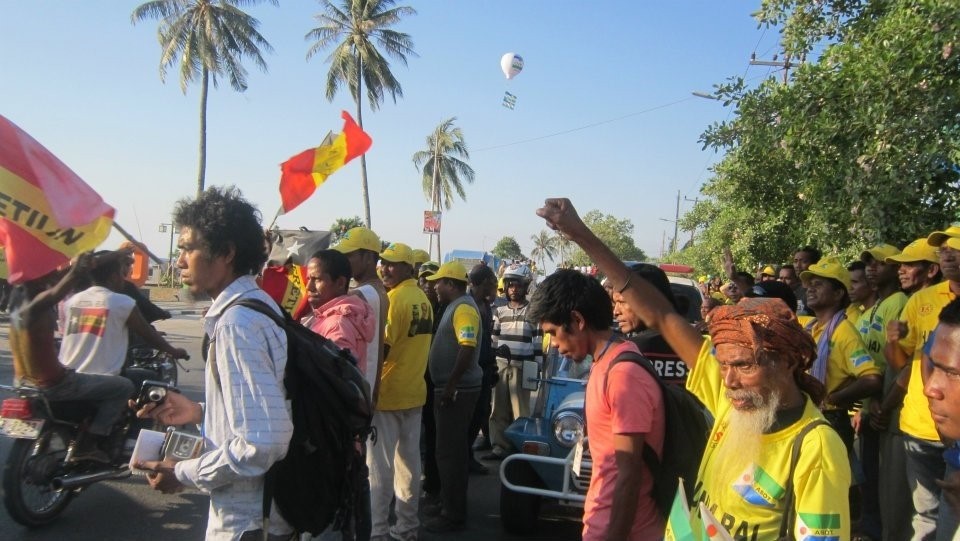 Can you tell us about your experience of field research in Timor-Leste?

Timor-Leste was my first experience of fieldwork and the first time outside of the West and in Asia. As the focus of my thesis was on symbols, the main task was taking photographs and getting images. I was also doing interviews and focus groups. It was very challenging in many ways.

I was very aware of my privilege of being white and western, so I think that was the first time I had to think about my positionality properly. The lingua franca is Tetum, and I had learned that at a conversational level before going, so it was challenging doing extensive interviews, but I was there long enough to improve.

The best story I have from my field trip was the Dili lockdown of 2012. I had timed my field trip to coincide with the parliamentary elections to see the full range of symbols and attend rallies. The National Congress for Timorese Reconstruction (CNRT), one of the two main political parties, won a majority and had to form a coalition government, but left the other big party, Fretilin, out of the coalition.

Supporters of the excluded opposition party were outraged and took to the streets, which led to rioting. The first couple of nights, trucks were driving up and down the road of our house looking for CNRT supporters who voted for the main party, and they were firing guns and burning out cars and houses – one person died. I was staying with a family who were known CNRT supporters and who told me to hide and stay under my bed when the riots sounded like they were close by. It was too dangerous to leave the house, and I had to stay inside for a week. The rioting was resolved relatively quickly, but it was a scary thing to happen during fieldwork. 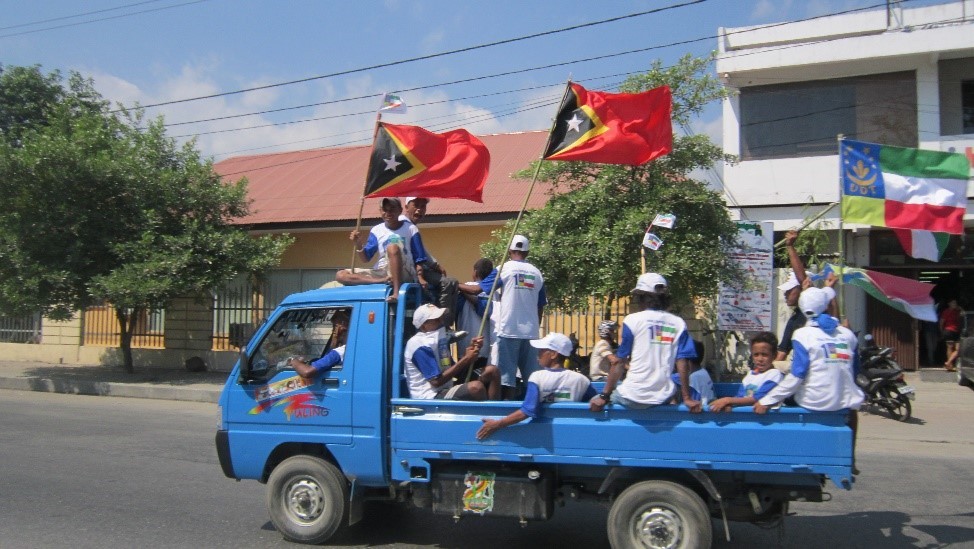 Can you tell us about your research on Street politics in critical times: Street art, graffiti, and artistic activism across the world?

I have written a chapter, ‘Street art in Timor-Leste: creative (re)constructions of identity in times of crisis,’ for the book Political Graffiti in Critical Times: An Aesthetics of Street Politics, which comes out in February. My chapter looks at street art in Timor-Leste in times of crises, focusing on the worst period of instability since independence in 2006 and the response to the 2012 riots. I look at these case studies to explore how street art has been used as a tool in peacebuilding.

As a social phenomenon, which is how I look at it, art is really in post-conflict societies as a powerful communicative tool. Images and symbolism can arguably express and communicate far more than words. Within my research, I am more interested in how art has been used as a communicative and representative tool to relate to members of the national community or to represent identity publicly or voice dissent. Those things are so complicated anywhere and especially in a post-conflict context.

What are your future research plans?

I am now taking my research in more of a peacebuilding direction by looking at how symbols operate within a conflict resolution context. If you look at places like Northern Ireland, Cyprus, and Israel-Palestine, for example, you see national symbols all the time. Differences in national identity and ethnicity define those conflicts. In those contexts, symbols are inherently divisive; they mark differences, they state divisions, create hostility, and sometimes they do incite violence. This means they are often assumed as a negative thing.

What I have found in my research on nation-building, however, is that national symbols have the potential to unite diverse populations under one identity and one flag. In Timor, there are 13 different regional identities, various regional dialects, different political allegiances, generational differences, and it is very diverse. Getting people to identify as one nation in Timor was challenging, but they managed it. So I am interested in exploring how this unifying function of symbols can potentially be used in conflict contexts – if at all – and how we can engage with symbolism differently in contexts of ethno-nationalist conflict to assist in conflict resolution and peacebuilding.

This could potentially look at a range of contexts, not just conflict zones. The rise in nationalism and populism, such as we have seen in Catalonia, for example, where there was tension and violence around symbols and identity, shows there is something there that can be either fixed or addressed.

A Brief History of Timor-Leste

Timor-Leste is a small half-island nation in South East Asia, next to Australia and Indonesia, which Portugal colonised for around 460 years. When Portugal left in 1975, there was a brief civil war because of the subsequent power vacuum. After the civil war, the victors, the Fretilin party, established a government and independent state, which only lasted ten days before Indonesia invaded on 7th December 1975. The invasion was to subsume the half-island into the Indonesian state as its 24th province. A military occupation that lasted for 24 years then followed, and relative to the population size, it was one of the worst genocides of the 20th century. During this time, there were massacres, mass-disappearances, mass human rights violations, torture, forced starvation, and forced displacement. It was a case of either they submit to Indonesia or do not, and risk death.

There was some armed resistance- a small guerrilla Army, the Falintil – who fought back for 24 years, and eventually, in the 1990s, what was happening in Timor-Leste was made public. In 1999 the UN got involved and held an independence referendum. Despite mass intimidation from Indonesia, the East Timorese people voted for independence, and in 2002, this was finally achieved.

To find out more about Dr Catherine Arthur’s research, visit her research profile. 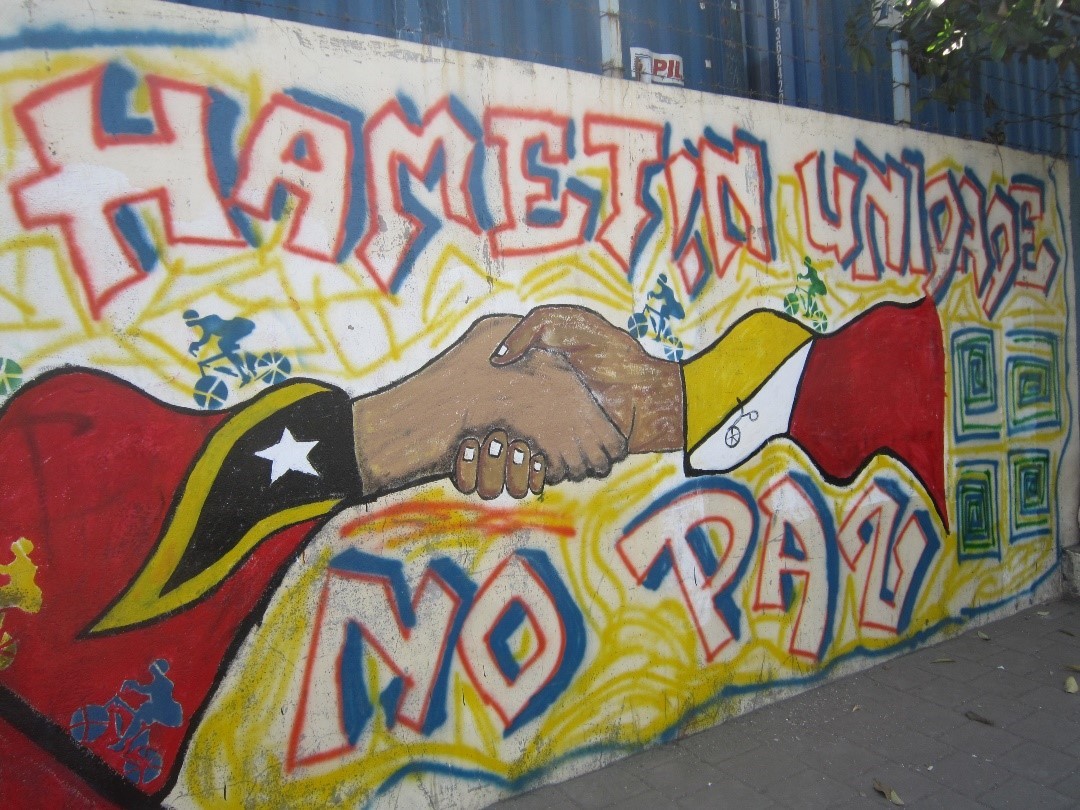