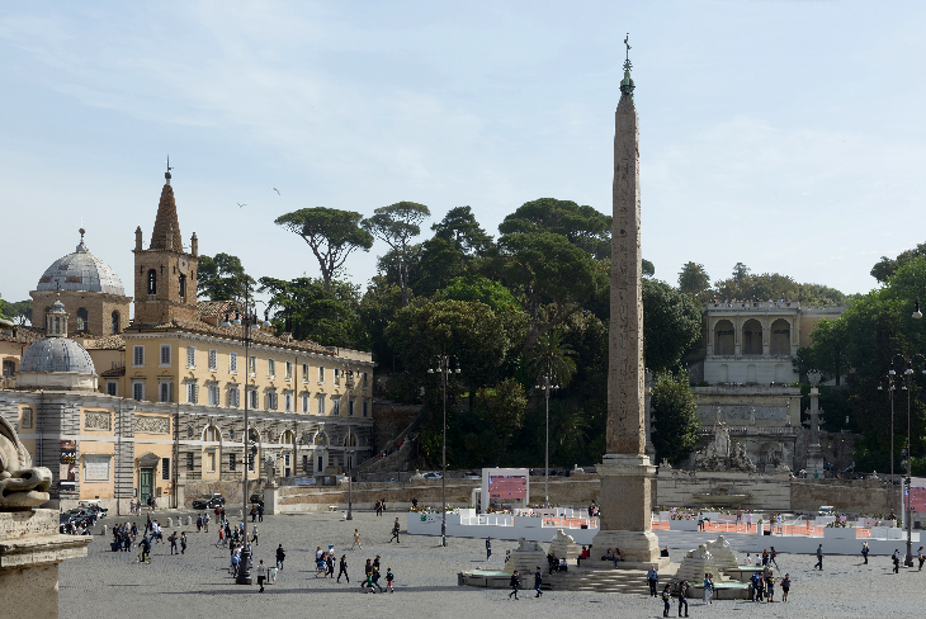 It’s a great place to sit in the shade and enjoy a gelato. The base of the Flaminian Obelisk in the Piazza del Popolo on the northern end of Rome’s ancient quarter offers views of the twin churches of Santa Maria dei Miracoli and Santa Maria di Montesanto. But while enjoying the outlook, take a few minutes to marvel at how this 23-metre chunk of granite ended up where it has.

The Flaminian Obelisk was carved at the height of Egypt’s New Kingdom, during the reign of Seti I (1290 to 1279 BCE), the father of Ramesses the Great. “Carved” is a rather clinical expression for an astounding feat of engineering. Quarrying and moving a 263-ton chunk of granite – with the additional issue of not having access to any metal harder than bronze – is no mean feat.

The process used by the Egyptians was surprisingly straightforward. Initially, they levelled off the ground above a vein of granite. Then the rough shape of the obelisk was marked using hard stone pounders. Channels were carved in the rock around the shape of the obelisk before it was separated from the bedrock entirely by carving under its bulk.

Afterwards, the obelisk was shipped on barges nearly 900km north to the Temple of Heliopolis near modern Cairo and dedicated to the sun god Re-Horakhty – and of course to the memory of both Seti and Ramesses.

Though much of our current obsessive cultural interest in ancient Egypt can be traced to key events such as the discovery of Tutankhamun’s tomb in 1922, other cultures at other times in history have had an equal interest in the land of the Pharaohs – and a similar penchant for creatively misrepresenting it.

At the height of the Roman Empire, “Egyptianising” architectural elements became very popular. Sites such as the Villa Adriana in Tivoli, built in the second century CE as a retreat for Emperor Hadrian, is positively lousy with Egyptianised statues and architectural elements – including an Egyptian-style shrine dedicated to the emperor’s lover, Antinous.

While these imitations of Egyptian styles and fashions (creatively altered for a Roman audience) were extremely popular, several Roman rulers went a step further. Rather than simply imitating Egyptian architecture, they brought some home with them from Egypt.

After the defeat of Cleopatra and Mark Anthony in 30 BCE, the first Roman emperor, Augustus Caesar, set his sights on the Flaminian Obelisk which had remained for more than 1,200 years at Heliopolis. To commemorate his comprehensive victory, Augustus opted to bring the obelisk back to Rome on a specially designed vessel, which was later destroyed in a fire in Puteoli.

Upon its arrival in Rome, Augustus added a Latin inscription underneath the far older hieroglyphs of the obelisk, extolling his own triumphs as the new ruler of Egypt. To show off his achievement, he ordered the obelisk raised at Circus Maximus.

As Christianity rose to prominence and became the official state religion of the Roman Empire, the arena fell into decay and flooding eventually toppled the obelisk. It was gradually buried in alluvial soil, lying undiscovered for nearly 1,000 years until it was unearthed at the height of the Italian Renaissance in 1587.

A product of the Italian Renaissance, Pope Sixtus V (1521-1590) embarked on a wide-ranging programme of urban renewal in Rome shortly after his election to the Papal Throne. Ironically, while he is credited with reerecting no less than four ancient obelisks in Rome, he had very little appreciation for the city’s own antiquity, ordering several ancient monuments demolished and the stone reused as building material.

When the Flaminian Obelisk was rediscovered in 1587, Sixtus charged the noted architect Domenico Fontana (1543-1607) with the task of raising the monolith in Piazza del Popolo (at that time a place of public executions), a task which he accomplished in 1589. Fontana was experienced in the art of raising obelisks – three years earlier, he had been responsible for placing the Vatican obelisk (which is heavier than the Flaminian obelisk by nearly 100 tons) in St Peter’s Square. In an attempt to detract from the quite obvious pagan nature of the monuments, both were crowned with large crosses.

With this, the journey of the Flaminian Obelisk from an ancient Egyptian tribute to the sun god to a Renaissance curio was completed. But the monument’s impact on history continued – in 1921, a year before seizing power after the March on Rome, Benito Mussolini (1883-1945) led a march past the obelisk during the Third Fascist Congress. Later on, the Flaminian Obelisk and the many other Egyptian and Roman obelisks found throughout the city prompted the dictator to create his own: a massive 300-ton concrete behemoth which still stands in Foro Italico (then Foro Mussolini) bearing the Latin inscription MVSSOLINI DVX (Mussolini, the Leader).

The Flaminian Obelisk is a multicultural monument in many ways. It remains today in its square, a physical testament to the grandiose ideas of three rulers – each in their own way both secular and divine: Pharaoh Seti I, Emperor Augustus Caesar and Pope Sixtus V.