Royal honour for School of Physics and Astronomy
Newsroom

Royal honour for School of Physics and Astronomy 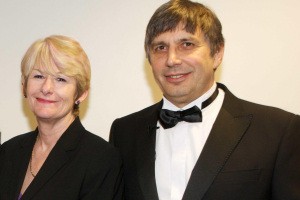 The University of Manchester’s School of Physics and Astronomy has been awarded a prestigious Regius professorship by the Queen, the government has announced.

Regius professorships are a rare privilege – before today’s announcement only two had been created in the past 100 years. The chairs are awarded to institutions that have demonstrated an exceptionally high quality of teaching and research in a specific discipline area.

The School of Physics and Astronomy, which also operates the Jodrell Bank Observatory in Cheshire, is one of the leading physics departments in the world with more than 1,000 students, leading research projects in physics, astrophysics and astronomy, and significant public engagement activities. The School boasts world-leading staff in all areas of modern physics and has produced nine of the 25 Nobel prize winners associated with The University of Manchester, two of whom are among the current staff.

The inaugural Regius Professor of Physics at Manchester will be conferred on Professor Andre Geim. As well as being awarded the 2010 Nobel prize for his work on graphene, Professor Geim has produced many key results in other areas of physics that have caught the public’s imagination, including development of ‘gecko tape’ and ‘levitating-frog’ experiments which won him the 2000 Ig Nobel prize.

Professor Stephen Watts, Head of the School of Physics and Astronomy, said: “Physics at Manchester has a proud tradition, starting with Rutherford and the discovery of the atomic nucleus, to the recent discovery of graphene. The School is proud of its world-class research, its impact on society, and dedication to passing that knowledge to the next generation. We are delighted these accomplishments have been recognised by the award of a Regius professorship by the Queen.”

Professor Colin Bailey, Vice-President and Dean of the University’s Faculty of Engineering and Physical Sciences, said: “It is a great honour to be bestowed a Regius professorship in recognition of the excellent education and research activities carried out by our staff in the School of Physics and Astronomy. I am particularly delighted that Andre has agreed to accept the inaugural Regius Professor of Physics. His passion for scientific research and education, together with its impact on society and the economy, is truly inspirational.”

Professor Nancy Rothwell, University President and Vice-Chancellor, added: “The University of Manchester has a proud and illustrious heritage in physics and astronomy teaching and research, so we are delighted that our past and present world-changing achievements have been recognised by such a prestigious honour bestowed by the Queen. Manchester remains at the heart of exciting new developments in science that have the potential to change the world.”

Commenting on the honour, Professor Geim said: “The Regius professorship reflects the tradition of exceptionally strong physics at The University of Manchester. I am most honoured to play a role as the current figurehead for this century-long effort. I would like to express my deep appreciation to the University and School leadership for their efforts in gaining this hallmark.”

David Willetts, Minister for Universities and Science, commented: “I was incredibly impressed by the quality and range of the applications received and am delighted that 12 new Regius professorships are to be created. Together, the successful applications demonstrated an exceptionally high level of achievement in both teaching and research.”