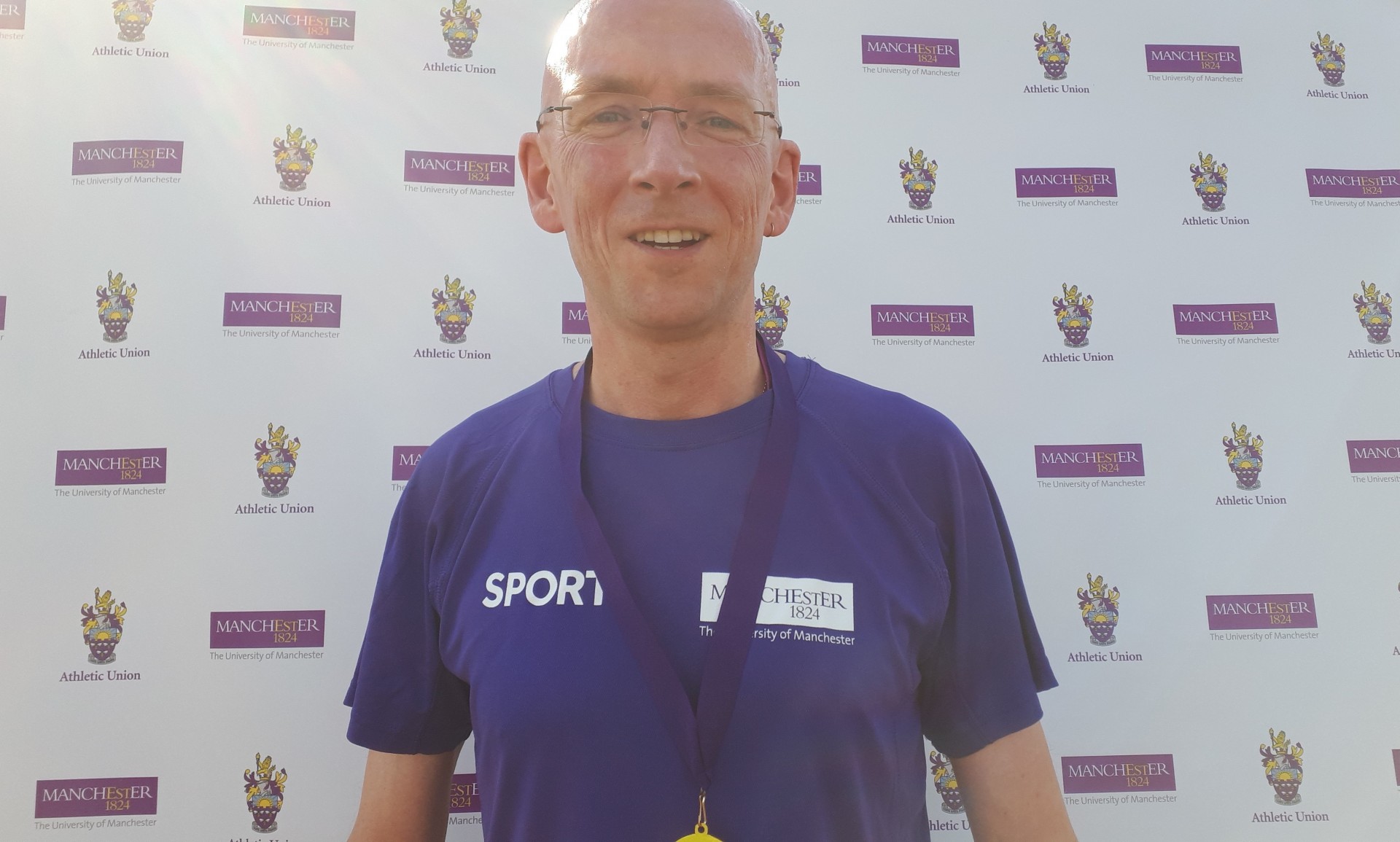 A runner based at The University of Manchester is almost a third of the way to completing his epic challenge of running 5km every day for a year.

Graham Holland – who is raising cash for Alzheimer’s Research UK – will reaches day 100, passing the 650km mark on 10 April.

He will also done the famous Purple shirt in the Great Manchester Run on May 19 – or day 139.

The University will have its own start time at the internationally renowned 10k run, with a Purple Wave of runners wearing the purple technical running t-shirts they receive on registration.

The eLearning support officer based at the University of Manchester Library will have run in excess of 1,825 km or 1,134 miles when he finishes on January 1, 2020.

He is spurred on by the desire to help his mum Eileen who was diagnosed with early onset dementia in 2018.

He said: “After my mum’s diagnosis I decided I wanted to do something to help Alzheimer’s Research UK which is doing great work on researching the causes, diagnosis, prevention and treatment of this disease.

“Dementia is such a terrible thing to happen to someone - and when it’s someone close to you, it’s particularly hard.

“And as ARUK is a partner charity for parkrun UK it made sense for me to support them.”

Eight years ago I was overweight and unfit. But At 49, I’m now the fittest I’ve even been and that’s a testament to running

Graham began running outdoors after colleagues at the library encouraged him to run at lunchtime and he went from strength to strength.

In no time he’d taken part in UMRun’s monthly Rundezvous scheme - where staff members run to work for a free breakfast – and became a regular in his local parkrun clocking a PB of just over 21 minutes for 5K.

And when he joined the Purple Wave for the first time in 2018 it was an easy decision for him to repeat the effort as part of his 365 day challenge.

He added: “Eight years ago I was overweight and unfit. But At 49, I’m now the fittest I’ve even been and that’s a testament to running.

“There’s something inspirational about running with other people which is why parkrun is so good and which is why I loved the Great Manchester run: you’re cheered the whole way which is amazing.

“Running is a release from whatever is going on at home. I listen to music or use the time to think. That’s why everyone should give it a go.”

Last year, 2,283 people donned the famous purple shirt to form their own Purple Wave in the race around Central Manchester.

Many students, staff and alumni have joined the Purple Wave in previous years, and run to raise money to support local young people access a world class education at Manchester.

Runners who agree to fundraise for The University’s acclaimed Undergraduate Access Scholarship will be able to run for free.

Runners will also be able to choose to fundraise for Equity and Merit Scholarships or medical research.