More about the University's heritage 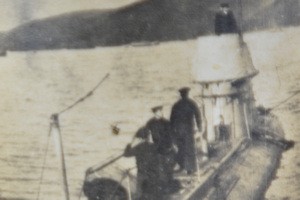 Manchester scientistd Ernest Rutherford – famed for “splitting the atom” – also deserves better recognition for helping to pioneer a system we now know as sonar as part of a top secret World War One defence project.

Rutherford, who worked at The University of Manchester, produced a ‘secret report’ during The Great War which was to form the basis of research to develop an acoustic system to detect German U-boats, then terrorising British merchant shipping and Royal Navy battleships.

Rutherford’s great genius was put to the test as he continued his ground-breaking work on nuclear science –successfully “splitting the atom" in 1917 – while also covertly leading a band of researchers to develop an effective method to detect submarines and safeguard Britain’s vital sea routes.

In 1915, the Nobel prize-winner published an historic paper entitled, ‘On methods of collection of sound from water and the determination of the direction of sound’.  In this document Rutherford “discussed the possibility of a system of secret signalling by the use of sound waves of frequency beyond the limit of audition”.

“This is the first mention of the system that would one day become modern sonar,” explained Dr Christine Twigg from The University of Manchester, who has researched this less well-known part of Rutherford’s brilliant career.

“This momentous report was the foundation of subsequent anti-submarine warfare and would safeguard thousands of Allied lives in both world wars.”

Rutherford’s team conducted clandestine experiments using water tanks at landlocked labs at The University of Manchester to test hydrophone systems before full-scale testing was conducted using two donated fishing trawlers at a research outpost based at Hawkcraig, on the south coast of Fife, Scotland.

Rutherford attracted the talents of former students and associates, including Albert Beaumont Wood, Harold Gerrard, Robert Boyle and William Henry Bragg. Critically, these exceptional pioneers would share their ideas with their French counterparts, such as Paul Langevin, to produce a working prototype of what the British originally called ‘ASDIC’ and later dubbed sonar.

Early versions of the technology were being installed on Royal Navy war ships just as the war came to an end but would be used to great effect in the following global conflict.

As sonar research progressed, Rutherford led an official British scientific mission to the USA in the spring of 1917 which coincided with America’s entry into the war – partly related to the outcry following  a German U-boat torpedoing the liner RMS Lusitania, with the loss of 128 American lives.

As a direct result of this trip a new naval research centre was set up in New London, America’s primary East Coast submarine base, and Rutherford continued to share his expertise with the Americans on naval research into peacetime.

This crucial work was kept from the public – and early biographers – for many years, as it was strictly embargoed by the Official Secrets Act.

However, Dr Twigg believes Rutherford and his team deserves full recognition for the significant contribution they made to science and the Allied war effort, a role that has been long overlooked.

“Rutherford’s role in the development of this field is relatively unknown and was rarely mentioned by his associates as it was one of the greatest official secrets at the time of his death in 1937,” added Dr Twigg.

“Nevertheless, it is believed to be an example of his great genius in an area of intellectual adventure which few had previously entered.”