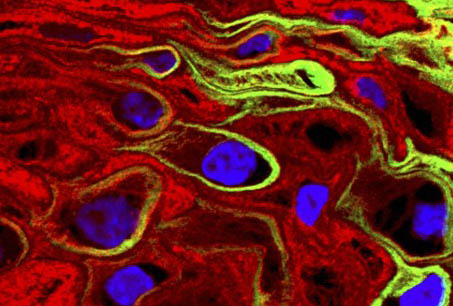 Manchester researchers have shown that the introduction of the HPV vaccination programme for girls has increased uptake for cervical cancer screening by their mothers.

The HPV vaccine offers protection against high risk virus strains that are known to cause cervical cancer, and was introduced to the UK in 2008 as a routine vaccination for girls aged 12 to 13 years old. These girls and their parents are provided with information about cervical cancer, HPV as a cause, and how the vaccine offers protection, before deciding whether to take part in the programme.

Previous studies in the North West and elsewhere have shown that women who attend for routine cervical smears are more likely to encourage their daughters to take up the offer of HPV vaccination. This latest research explored the reverse scenario.

Angela Spencer, who conducted the study, explained: “Potentially, a lack of knowledge or understanding about the causes and risk of cervical cancer could prevent women from attending screening. We wanted to see if a daughter’s involvement in HPV vaccination stimulated her mother’s cervical screening attendance.”

The group from The University of Manchester, led by Dr Loretta Brabin, Dr Steve Roberts and Dr Arpana Verma, looked at data for over 100,000 mother-daughter pairs in the North West of England where girls had been scheduled to take part in the vaccination programme between 2008 and 2010. They then included for comparison a similar number of women who were not linked to girls eligible for vaccination.

They found that mothers of girls offered vaccination were significantly more likely to return to the cervical screening programme following a period of non-attendance, compared to those women in the comparison group who were not linked to vaccine eligible girls. Screening return was significantly higher in the year of a daughter’s HPV vaccination.

This increased uptake was more apparent for those mothers who had never attended for a smear test.  “Subsequently,” noted Mrs Spencer. “Mothers told us that they often still have reservations about screening but discussing vaccination and screening with their daughters encouraged some to set an example by returning to the screening programme.”

£1 million raised for University’s Coronavirus Hardship fund
Graphene and 2D materials could move electronics beyond ‘Moore’s Law’
New tool computes risk of getting COVID-19
Prof Paul Henley's book is published in French
Writing the Pandemic: Manchester's young voices
Black Lives Matter and our University – a message from Professor Nalin Thakkar
Some modules are disabled because cookies are declined. Accept cookies to experience the full functionality of this page.
ACCEPT COOKIES
We use cookies to optimize the website, no personal information is stored. Learn more
DECLINE COOKIES ACCEPT COOKIES