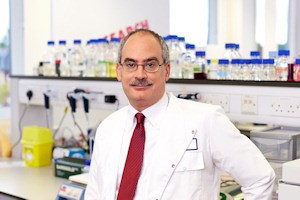 A way to eradicate cancer stem cells, using the side-effects of commonly used antibiotics, has been discovered by a University of Manchester researcher following a conversation with his young daughter.

Professor Michael P. Lisanti, Director of the Breakthrough Breast Cancer Unit, led the research.  He was inspired to look at the effects of antibiotics on the mitochondria of cancer stem cells by a conversation with his daughter Camilla about his work at the University’s Institute of Cancer Sciences. Camilla is currently a student at the Moor Allerton Preparatory School.

His new paper, published in Oncotarget, opens up the possibility of a treatment for cancer, which is highly effective and repurposes drugs which have been safely used for decades.

Mitochondria are the ‘engine’ parts of the cells and are the source of energy for the stem cells as they mutate and divide to cause tumours. Cancer stem cells are strongly associated with the growth and recurrence of all cancers and are especially difficult to eradicate with normal treatment, which also leads to tumours developing resistance to other types of therapy.

Professor Lisanti said: “I was having a conversation with Camilla about how to cure cancer and she asked why don’t we just use antibiotics like we do for other illnesses.  I knew that antibiotics can affect mitochondria and I’ve been doing a lot of work recently on how important they are to the growth of tumours, but this conversation helped me to make a direct link.”

Professor Lisanti worked with colleagues from The Albert Einstein College of Medicine, New York and the Kimmel Cancer Centre, Philadelphia.  The team used five types of antibiotics – including one used to treat acne (doxycycline) – on cell lines of eight different types of tumour and found that four of them eradicated the cancer stem cells in every test. This included glioblastoma, the most aggressive of brain tumours, as well as lung, prostate, ovarian, breast, pancreatic and skin cancer.

Mitochondria are believed to be descended from bacteria which joined with cells early on in the evolution of life.  This is why some of the antibiotics which are used to destroy bacteria also affect mitochondria, though not to an extent which is dangerous to people. When they are present in stem cells, mitochondria provide energy for growth and, crucially, for division, and it is this process going wrong which leads to cancer.

In the lab, the antibiotics had no harmful effect on normal cells, and since they are already approved for use in humans, trials of new treatments should be simpler than with new drugs – saving time and money.

Professor Lisanti said: “This research makes a strong case for opening new trials in humans for using antibiotics to fight cancer.  Many of the drugs we used were extremely effective, there was little or no damage to normal cells and these antibiotics have been in use for decades and are already approved by the FDA for use in humans. However, of course, further studies are needed to validate their efficacy, especially in combination with more conventional therapies.”

Dr Matthew Lam, Senior Research Officer at Breakthrough Breast Cancer, said: “The conclusions that the researchers have drawn, whilst just hypotheses at this stage, are certainly interesting. Antibiotics are cheap and readily available and if in time the link between their use and the eradication of cancer stem cells can be proved, this work may be the first step towards a new avenue for cancer treatment.

“This is a perfect example of why it is so important to continue to invest in scientific research. Sometimes there are answers to some of the biggest questions right in front of us but without ongoing commitment to the search for these answers, we’d never find them.”

Importantly, previous clinical trials with antibiotics - intended to treat cancer-associated infections, but not cancer cells - have already shown positive therapeutic effects in cancer patients.  These trials were performed on advanced or treatment-resistant patients.

In the lung cancer patients, azithromycin, the antibiotic used, increased one-year patient survival from 45% to 75%. Even lymphoma patients who were ‘bacteria-free’ benefited from a three-week course of doxycycline therapy, and showed complete remission of the disease. These results suggest that the antibiotic’s therapeutic effects were actually infection-independent.

“As these drugs are considerably cheaper than current therapies, they can improve treatment in the developing world where the number of deaths from cancer is predicted to increase significantly over the next ten years,” said Dr Federica Sotgia, another leader of the study.

The research was published in the journal Oncotarget and part-funded by Breakthrough Breast Cancer.

The paper is available here.

Cancer is one of the University of Manchester’s research beacons - examples of pioneering discoveries, interdisciplinary collaboration and cross-sector partnerships that are tackling some of the biggest questions facing the planet.