SCI Mat Paterson spoke at the Policy@Manchester Conservative Party Conference fringe event 'Can renewables catalyse levelling up and tackle the cost of living?'. 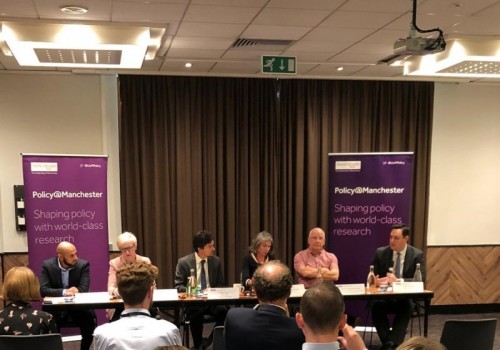 Mat spoke about how renewables can help alleviate the cost of living crisis but only as part of a wider package of resources and investment. Contrary to the Government’s current plans of returning to fossil fuels expanding fossil fuel supply through fracking and renewed North Sea exploration will do nothing to help the immediate crisis.

He emphasises that the Government needs to pursue energy efficiency aggressively at this point in time to reduce energy demand in times of high electricity and gas prices.

Renewables are an important part of the long term solution for freeing ourselves from the UK’s dependence on gas and the focus should therefore be on how to transition to renewable energy across the grid sooner rather than later.

Dealing with electric vehicle infrastructure is also important as owning an electric private vehicle is currently not practical for most households. Similarly, the UK’s public transport system would benefit from being upgraded so that travelling across the UK becomes an electrified and green endeavour for everyone – not just car owners.

Despite them being less profitable, renewables are a cheap form of energy and therefore their expansion should be pursued with great urgency.