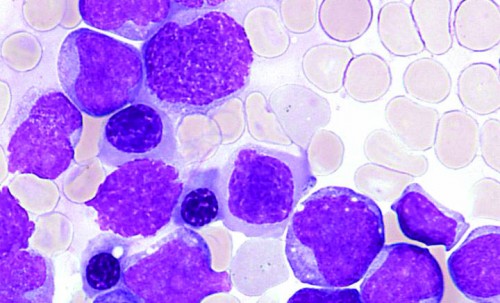 New research, by the Universities of Glasgow and Manchester, has revealed an ‘Achilles heel’ of Chronic Myeloid Leukaemia (CML) and found drugs to successfully target this weakness and eradicate the disease in mice.

The study, which is published in Nature today, analysed both CML and normal blood stem cells and found two proteins that were key to the survival of CML stem cells. The group, which has been working on this research for more than six years, then developed a drug combination to simultaneously target these critical proteins and kill the cancer stem cells, while largely sparing normal cells.

The interdisciplinary research team, led by Professor Tessa Holyoake from the University of Glasgow and Professor Tony Whetton from The University of Manchester, used a range of techniques to show that these two proteins (p53 and c-Myc) act as ‘gateway controllers’ in CML.

Guided by the concept of precision medicine (the right drug, at the right time, for the right effect in the patient), the team designed a new treatment to exploit this critical weakness in the cancer. Using CML cells transplanted into mice, the authors demonstrated that drugs targeting these two proteins killed the cells that cause the leukaemia, effectively eradicating the disease.

The results have potential implications for other cancers including acute myeloid leukaemia and brain tumours. The researchers are now keen to build on their work by beginning human trials in patients with drug-resistant CML.

Professor Holyoake, who led the team from the Paul O'Gorman Leukaemia Research Centre, said: “We are certainly excited by the results shown in the study. The research – a fantastic example of precision medicine in action – is at an early stage, but the data we collected has revealed two weaknesses in CML and a potential drug approach to eradicating these key stem cells.

“We also could not have achieved such an excellent result without all the generous stem cell donations from both CML patients and other members of the public, so it is important to say thank you to them.”

The team used a range of techniques in their research including proteomics (the large scale study of quantities, structures and functions of proteins).

Professor Whetton said: “We have found a way to kill leukaemia stem cells which could lead to cure of chronic myeloid leukaemia instead of managing the disease. We are really excited that our new proteomics approaches helped to achieve this.

“There are so many other diseases where we can use the same proteomics approach to find precision medicine solutions for patients. We have the largest clinical proteomics centre in Europe in Manchester so we really look forward to contributing to this work.”

Current therapy for CML is with tyrosine kinase inhibitors (TKIs) which effectively hold back the disease, but do not cure it. If the therapy is stopped, the leukaemia relapses in the majority of patients, requiring CML patients to remain on treatment for their lifetime. These drugs, as well as being costly to administer, can cause a number of side effects including diabetes and vascular problems. It is the dual issues of cost and toxicity in current CML treatment that has driven this particular piece of research.