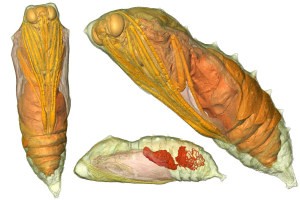 The unique pictures were taken using a computed tomography (CT) scanner and show in amazing detail nine Vanessa cardui pupas (the life stage after the caterpillar) as they underwent metamorphosis into painted lady butterflies inside a hard outer shell.

The research, published in the Journal of the Royal Society Interface, was carried out by Dr Tristan Lowe, Professor Philip Withers and Dr Russell Garwood in the Henry Moseley X-ray Imaging Facility at the University’s School of Materials.

Geologist, Dr Garwood said: “This form of high resolution CT scanning – called micro-CT – was only developed in the 1980s, and has only really become widely available in the last decade or so as scanners have got cheaper and computing power has improved.

“The biggest challenges in the technique are minimising the radiation dose to the insects and the amount of data processing that is required to create the models but micro-CT proved a valuable tool for investigating insect development and allowed us to follow the development of a single individual throughout development.”

The CT scanner is capable of 0.003mm resolution – easily enough to image the pupae, which were about 25mm in length – and could be used to study insect development instead of traditional dissection, which can be time-consuming and requires killing a different specimen for each stage of development.

“The general picture of pupal development we had was correct, although these scans did suggest the breathing system either developed faster than we might have expected or that there was less remodelling, and more of the breathing apparatus was carried over from the caterpillar to the adult,” said Dr Garwood.

“The implications are that this technique could be used in the future as a means of studying development, probably alongside traditional techniques. Making studying insect development easier could help us with many things – studying the impact of mutations in well-known model organisms, investigating the effect of insecticides on insect development, and for forensic entomology studies, where it's actually been used before, but with staining to enhance CT contrast that precluded scanning a single individual.”

A copy of the paper, images of the scans and a video are available on request.