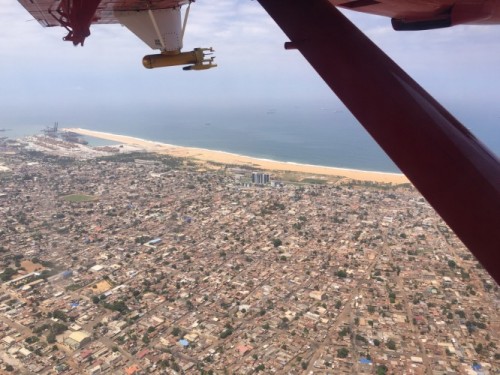 Scientists operating research aircraft over West Africa have detected organic materials in the atmosphere over a number of urban areas, contributing to concerns of the rise in pollution across the region.

The EU-funded Dynamics Aerosols Clouds and Climate in West Africa (DACCIWA) project has, for the first time, investigated the impacts of natural and manmade emissions on the West African atmosphere.

The team includes scientists from the Universities of Manchester, York, Leeds and Reading, led by the Karlsruhe Institute of Technology and in partnership with the UK National Centre for Atmospheric Science.

Three aircrafts, carrying sophisticated instruments to collect atmospheric data, were used to track air pollution from the big coastal cities of Accra, Abidjan, Lomé and Cotonou, as it streams inland reaching the forests and the Sahara.

It is thought that the organic materials detected in the atmosphere could be particles from the burning of charcoal, general rubbish, and agricultural waste and could impact the clouds and climate in the region.

“West Africa is a region that will grow and develop rapidly over the coming decades, and yet we know very little about air quality and meteorology across the region, mainly because of a lack of data.”

Dr Mat Evans, from the University of York’s Wolfson Atmospheric Chemistry Laboratories, explains: “Monsoon winds with sea salt from the south, Sahara winds with dust from the north, charcoal fires and burning rubbish from cities as well as power plants, ship traffic, oil rigs and out-dated engines, contribute to the air over the coastal regions, making it a unique mixture of various gases, liquids and particles. At the same time, multi-layer cloud decks frequently form in the atmosphere that exerts a large influence on the local weather and climate.”

Scientists have been concerned for some time now that a rapidly growing population in the region, urbanisation, and complex meteorological influences, as well as unregulated deforestation and air pollution, have modified the composition of the atmosphere. This not only impacts on human health but also the weather and climate.

The true extent of the problem and exactly how these emissions are changing the region in the long-term are still unknown.

Dr John Marsham, from the University of Leeds, said: “The measurements we have taken from the aircrafts have shown us for the first time an enormous complexity in the different cloud layers, the causes of which are still unclear.”

The long-term aim of the project is to identify new and more precise climate, weather and air quality models to support policies for a more sustainable climate for the region.