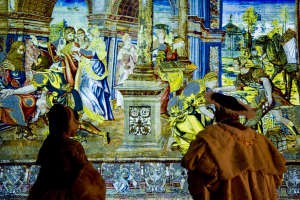 Scientists from the University of Manchester have turned back the clock 500 years - to reveal the original splendour of a faded 16th century tapestry.

Professor Chris Carr, Dr. Huw Owens and Ruth Perkins, from the University's School of Materials, have spent the past three years scrutinising every thread of 'The Oath and Departure of Eliezer', which was commissioned by King Henry VIII and now hangs at Hampton Court Palace.

And now they have completed a ground-breaking 'virtual restoration' of the work, which uses tiny beams of specially-calibrated light to show the fine wool and silk threads in their original colours.

"For the first time in 500 years people will be able to see what the tapestries would have originally looked like," said Professor Carr. "And I think they will be blown away.

"These tapestries, because they have used natural dyes, tend to fade in sunlight relatively quickly. But originally many of these colours would have been bright and vibrant.

"They also had a significant amount of gold and silver. Metal threads would have been wrapped around a silk core yarn to give it a shiny rich appearance. This would have had a massive visual impact, conveying the wealth linked to these tapestries, but unfortunately these metal threads have tarnished and corroded with time."

The 'virtual restoration' is the result of years of painstaking work that began with the recreation of the original 16th century dyeing methods at the University.

After recreating the dyed wool and silk - dyed from materials such as weld, old fustic, woad and madder - the scientists artificially aged the dyed fabrics to determine how individual dyes were affected by light over time.

In the next stage of the research PhD student Ruth Perkins spent three months at Hampton Court Palace carefully measuring the colour of yarns on the back of the 'The Oath and Departure of Eliezer' tapestry, where the thick fabric and lining had slowed the fading process.

And then the data she collected - linked with the research about the impact of ageing on 16th century dyes - was used to determine what the original colours of the tapestry would have been.

In the final stage of the project lecturer Dr Huw Owens worked out how tiny specially calibrated beams of light could be used to shine on to two million separate sections of the tapestry to temporarily 'return' each of the yarns to their original colour.

"Everyone involved is incredibly excited about it," said Ruth Perkins.

"We are used to seeing these tapestries in browns, greys and blues - but originally many of these colours would have been bright reds, yellows and pinks. They were incredibly vibrant.

"The light does really bring out the detail. It even makes some of the tarnished gold threads sparkle. It makes a big difference.

"People will find it difficult to believe that that is how it used to look because it is so different."

‘The Oath and Departure of Eliezer’ is one of a series of 10 tapestries in the History of Abraham series that were owned by Henry VIII and displayed at his favourite royal residence, Hampton Court Palace.

The 'virtual restoration' is part of Hampton Court Palace's plans to mark the 500th anniversary of the King’s  accession to the throne. The light projection will be shown in an exhibition entitled ‘Henry VIII’s Tapestries Revealed’ at timed intervals throughout the day.

Commenting on the 'restoration', Kathryn Hallett, Preventative Conservation and Science Manager at Historic Royal Palaces, said: "This project, the first ever 'virtual restoration'  of a tapestry, will show how these magnificent works of art would have dazzled visitors to Henry VIII's Great Hall at Hampton Court Palace 500 years ago.

"The unique multi-media installation will be available for visitors to view from April, showcasing one of the few remaining types of artwork to have a direct link with Henry VIII himself, and revealing the spectacular colour and vibrancy of the Tudor court in the 500th anniversary year of the King's accession to the throne."

Professor Carr says that in the future the School of Materials would like to be involved in further 'virtual restoration' projects. But he says that this will ultimately depend on whether external funding is available to support these intensive and detailed research activities.

'The Oath and Departure of Eliezer' is part of a series of tapestries depicting The History of Abraham, which was commissioned by Henry VIII to mark the birth of his son, Edward VI. It depicts the Biblical story in which God blesses the ageing and childless Abraham with two sons.

The design of the tapestries is attributed to Pieter Coecke van Aelst and Bernaert van Orley and was woven in the workshop of Willem de Kempeneer, Brussels, between 1541 and 1543.

The 'virtual restoration' will be shown at timed intervals in the exhibition ‘Henry VIII’s Tapestries Revealed’ in the Queen's Guard Chamber at Hampton Court Palace from April 10, 2009 to January 10, 2010.