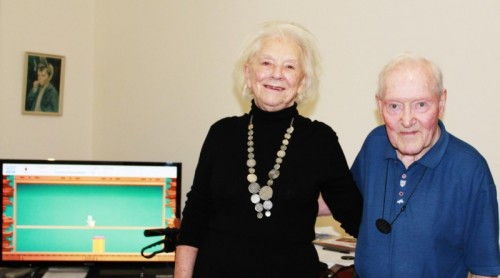 Joy a former professional dancer and Bert who worked as an inspector at Dunlop were two of the first to test out the ‘Exergames’, which have been specially developed by MIRA Rehab Limited with clinical and academic expertise from Trafford Hospitals and The University of Manchester. The games have been developed to help reduce the number of falls elderly people experience in the community.

The friends were asked to take part in the initial study at their independent living accommodation where an Exergames session was provided three times a week. Both Joy and Bert believe that the Exergames have helped with their balance and boosted their confidence.

Led by Dr Emma Stanmore, from the University’s School of Nursing, Midwifery and Social Work, the next step of the project is to run a new research study, to refine the Exergames and conduct a randomised controlled trial. This is supported by MIRA Rehab Ltd, which is receiving over £600,000 of funding through a pre-procurement contract from the Small Business Research Initiative (SBRI) Healthcare Phase 2 award, NHS England.

The study will compare the effectiveness of MIRA’s computer games, against standard prevention programmes, in reducing falls in the community. At least 30 per cent of people aged 65 and older experience a fall each year. Even more alarmingly, this figure rises to 50 per cent for those aged 80 and over.

The issue is expected to have an ever increasing impact, as the UK population ages, and represents a significant cost to the NHS at more than £2.3 billon every year.

Research has shown that engaging in certain physical exercises can prevent falls by at least 40 per cent, but many older people find it difficult to maintain sufficient activity levels. The series of computer games, called Exergames, aim to make staying active more engaging for older people.

Joy explained: “I’ve always been quite fit and tried to exercise, but as I got older I found that I could quite easily lose my balance when I turn. For me, Exergames provided a structure to encourage me to exercise more regularly. I found that as a result I could get up more easily after kneeling down. I feel healthy and positive that I’m doing something to help prevent problems that might otherwise occur.” 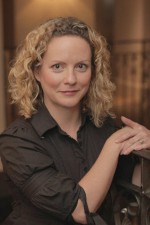 We spoke with a lot of older people and physiotherapists before creating the games, because it was really important that what we produced was easy to use and made keeping fit as fun as possible.

Bert added: “I use a walking stick to steady myself and have had a couple of falls. The Exergames consists of a number of different games designed to work different parts of your body. The Exergames are helping with my balance, confidence and in keeping me alert.”

The Exergames were developed by MIRA Rehab as part of its MIRA software platform and are played using a Microsoft Kinect sensor to monitor body movements. They can be programmed by clinicians to be tailored to the individual’s level of ability, taking into account fatigue, pain and fear of falling.

The MIRA software, which includes activities such as squatting to control movement of objects on a TV or computer screen, logs the duration of gameplay, how frequently it is used, and provides reports to clinicians on patients’ progression.

Dr Emma Stanmore, Lecturer in Nursing at The University of Manchester explained: “We spoke with a lot of older people and physiotherapists before creating the games, because it was really important that what we produced was easy to use and made keeping fit as fun as possible. 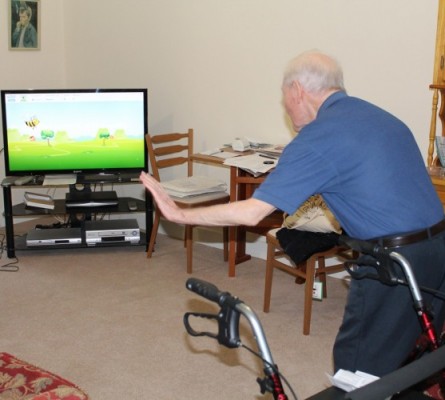 “We have already worked with older people to test the games in community centres. The results so far have been promising and this new funding will help us to further optimise the games. As part of this work we will be developing a remotely monitored version which will be trialled and, ultimately, used in the comfort of people’s own homes.”

Cosmin Mihaiu, Co-founder & CEO, MIRA Rehab Ltd said: “The insight that working with clinicians and patients brings is great. We will soon be in a position to test a more refined version of the Exergames. This new multi-centre randomised controlled study will hopefully provide the comprehensive evidence to make the Exergames available to patients across the NHS and further afield.”

MIRA’s Exergames currently include 12 games with a variety of physiotherapy exercises, such as leg lifts and squats, with more gaming environments already in development. Previous phases of the development and testing were funded by MIRA Rehab Ltd through a prior SBRI Phase 1 award, CMFT Charity and The University of Manchester’s Manchester Institute for Collaborative Research on Ageing. The project was also supported by Manchester Improving Medicines with Innovative Technology (MIMIT) and TRUSTECH, the North West NHS Innovation Service.