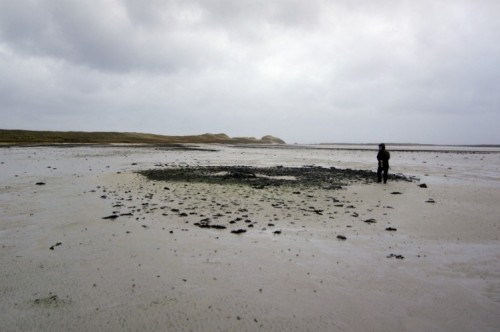 The remains of a Bronze Age settlement have been unearthed beneath sand dunes in the Orkney Islands.

They found a series of circular stone spreads which were revealed to be the remains of Bronze Age homes, each covered with a mass of stone tools. A total of 14 gatherings of stone ruins were found along a kilometre stretch.

The discovery came by surprise to the archaeological team who were taking a walk in bad weather during a field trip on the island.

Professor Colin Richards, of The University of Manchester, said: “This is a major discovery as the houses and a Bronze Age land-surface has clearly been sealed beneath the dune system for some 4000 years.It was the scale and density of occupation that really surprised us. Not only are house structures present but working areas are also visible.

"The possibility now exists to gain a snapshot of everyday life in the second millennium BC. However, their uncovering is a result of gradual coastal erosion, particularly the dune system, which means that now exposed they are at the mercy of the elements."

This new discovery provides a rare opportunity to examine a dispersed settlement from the little understood Bronze Age in detail.

The possibility now exists to gain a snapshot of everyday life in the second millennium BC.

Professor Richards added: “The discovery of the complex of Bronze Age houses and working areas was entirely unexpected. In fact we walked past a number of ‘piles of stone’ without realising that they were actually the remains of Bronze Age buildings as Orkney is distinctive in having stone-built remains for the majority of the prehistoric periods. The most extraordinary observation is that the settlement appears to run over a kilometre with roughly evenly spaced houses and working areas. Further investigations may well uncover stone field walls and boundaries.”

Professor Jane Downes, of University of the Highlands and Islands, a specialist in the Bronze Age, said: “This must be one of the biggest complexes of Bronze Age settlement in the Scottish isles, rivalling the spreads of hut circles in other parts of mainland Scotland.”