Silent stroke can cause Parkinson’s disease 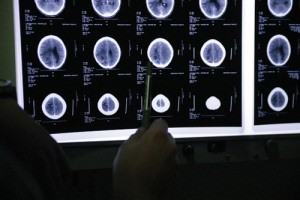 Scientists at The University of Manchester have for the first time identified why a patient who appears outwardly healthy may develop Parkinson’s disease.

Whilst conditions such as a severe stroke have been linked to the disease, for many sufferers the tremors and other symptoms of Parkinson’s disease can appear to come out of the blue. Researchers at the university’s Faculty of Life Sciences have now discovered that a small stroke, also known as a silent stroke, can cause Parkinson’s disease. Their findings have been published in the journal “Brain Behaviour and Immunity”.

Unlike a severe stroke, a silent stroke can show no outward symptoms of having taken place. It happens when a blood vessel in the brain is blocked for only a very short amount of time and often a patient won’t know they have suffered from one. However, it now appears one of the lasting effects of a silent stroke can be the death of dopaminergic neurons in the substantia nigra in the brain, which is an important region for movement coordination.

Dr. Emmanuel Pinteaux led the research: “At the moment we don’t know why dopaminergic neurons start to die in the brain and therefore why people get Parkinson’s disease. There have been suggestions that oxidative stress and aging are responsible. What we wanted to do in our study was to look at what happens in the brain away from the immediate area where a silent stroke has occurred and whether that could lead to damage that might result in Parkinson’s disease.”

The team induced a mild stroke similar to a silent stroke in the striatum area of the brain in mice. They found there was inflammation and brain damage in the striatum following the stroke, which they had expected. What the researchers didn’t expect was the impact on another area of the brain, the substantia nigra. When they analysed the substantia nigra they recorded a rapid loss of Substance P (a key chemical involved in its functions) as well as inflammation.

The team then analysed changes in the brain six days after the mild stroke and found neurodegeneration in the substantia nigra. Dopaminergic neurones had been killed.

Talking about the findings Dr Pinteaux said: “It is well known that inflammation following a stroke can be very damaging to the brain. But what we didn’t fully appreciate was the impact on areas of the brain away from the location of the stroke. Our work identifying that a silent stroke can lead to Parkinson’s disease shows it is more important than ever to ensure stroke patients have swift access to anti-inflammatory medication. These drugs could potentially either delay or stop the on-set of Parkinson's disease.”

Dr Pinteaux continued: “What our findings also point to is the importance of maintaining a healthy lifestyle. There are already guidelines about exercise and healthy eating to help reduce the risk of having a stroke and our research suggests that a healthy lifestyle can be applied to Parkinson’s disease as well.”

Following the publication of these findings, Dr Pinteaux hopes to set up a clinical investigation on people who have had a silent stroke to assess dopaminergic neuron degeneration. In the meantime he will be working closely will colleagues at The University of Manchester to better understand the mechanisms of inflammation in the substantia nigra.

Dr. Pinteaux is available for interviews.

The research was funded by the European Union’s Seventh Framework Programme (FP7/2008-2013) under grant agreements Nos. 201024 and 202213 (European Stroke Network) and the Simon and Simone Collins studentship.

The paper is titled: “Loss of Substance P and inflammation precede delayed neurodegeneration in the substantia nigra after cerebral ischemia” It can be downloaded here