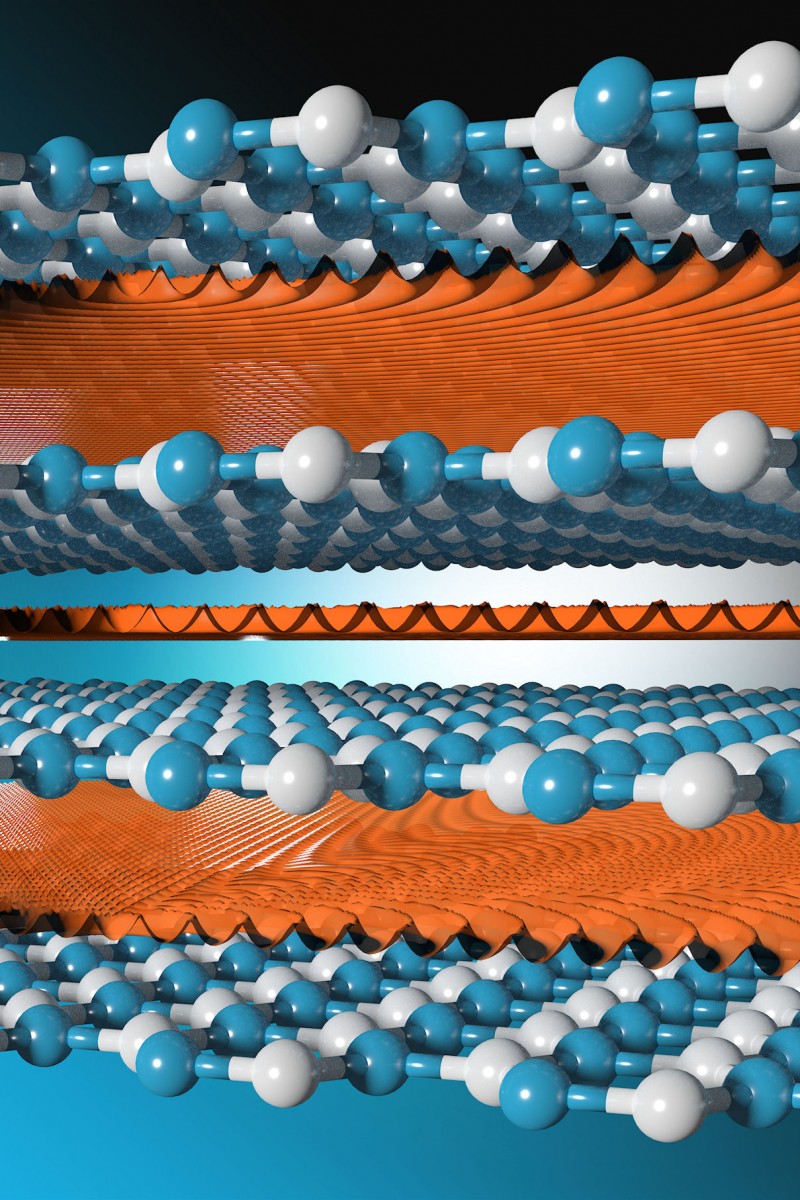 Researchers at The University of Manchester have discovered that the naturally occurring gaps between individual layers of two-dimensional materials can be used as a sieve to separate different atoms.

Writing in Nature Nanotechnology, the Manchester scientists show that hydrogen and deuterium –two hydrogen isotopes – can be separated if pushed through miniscule spaces in between atomically thin materials such as hexagonal boron nitride or molybdenum disulphide.

Similar to graphene these materials can exist in a two-dimensional (2D) layer and exhibit unique properties due to their physical structure. Stacking different 2D crystals can allow the creation of bespoke multifunctional materials tailored to specific purposes.

The Manchester team led by Sir Andre Geim reported that some 2D layered crystals can be used as the smallest possible mesh to create sub-atomic sieves. At first glance, there is no space left between the atomically thin layers of the crystals because they are densely stacked on top of each other.

However the team discovered tiny gaps did exist by successfully forcing hydrogen isotopes to pass through the miniscule cavities. By doing so, the team managed to separate these isotopes at room temperature, exploiting an exotic phenomenon, known as quantum sieving.

Half an angstrom is really the absolute limit of how matter can be confined. One can only speculate about what kind of phenomena can occur at this scale. We can now use layered crystals to investigate further in essentially a benchtop experiment

Isotope separation is typically a highly energy intensive operation which is used in nuclear, medical and research sectors. Hydrogen and deuterium – isotopes of hydrogen – have the same size if considered as classical particles but are rather different in size as waves if their quantum nature is taken into account.

Deuterium has a shorter wavelength than hydrogen, which allows it to pass more easily through tiny capillaries and become separated from hydrogen. This sieving mechanism, known as quantum sieving, exploits an attribute known as the ‘particle-wave duality of matter’ – a well-known physics phenomenon. However, extremely low temperatures are typically required to observe it.

Observing matter behaving as waves at room temperature requires much finer sieves, this has so far been impossible to achieve. Now, the Manchester team has shown that 2D materials can provide such sieves and that these sieves can be used to separate hydrogen isotopes at room temperature. This could allow for the separation process to be much more efficient.

In most other materials, the heavier isotope – in this case the deuterium – would travel slower than the lighter one – hydrogen. In contrast, the Manchester team found that deuterium squeezed easier through gaps in these crystals than hydrogen. The reason was shown to be the heavier mass of deuterium, which translates into a shorter wavelength and therefore allows easier passage through narrowest grids.

Dr Marcelo Lozada, the corresponding author in this study, added “Half an angstrom is really the absolute limit of how matter can be confined. One can only speculate about what kind of phenomena can occur at this scale. We can now use layered crystals to investigate further in essentially a benchtop experiment.”

The scientists are optimistic about the implications of this discovery and are continuing to investigate these layered crystals in combination with other materials for isotope separation. This technology could complement previous discoveries from the Manchester group. Last year the same group showed that graphene membranes can provide the most efficient technology for hydrogen isotope separation.