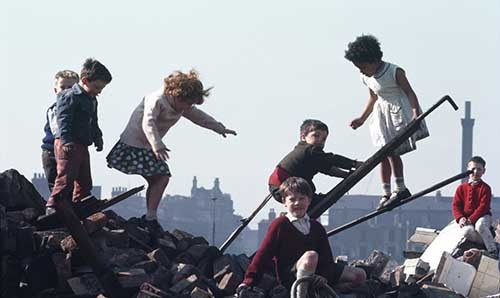 Visitors to the Manchester Art Gallery’s Shirley Baker exhibition have been able to hear the voices of some of the children photographed by Baker in post-war Manchester and Salford. The stories, gathered by a Manchester sociologist, were used to make an audio guide to the exhibition, which is now nominated for a City Life Award.

Professor of Sociology and History Penny Tinkler jointly led a project to unearth the stories behind Shirley Baker’s famous images of everyday life in Manchester in the 1960s and 1970s. Taken during the ‘slum clearances’ of the time, some of the photographs show children playing in the rubble of demolished streets with recognisable landmarks in the background. One shows a very young child playing on a demolished site, with University of Manchester buildings behind them.

Prof Tinkler worked with exhibition curator Anna Douglas to collect the stories; interviewing people who lived and played in the streets in the photographs. Some were able to spot themselves in Baker’s images. Visitors to the exhibition were able to listen to the stories as they looked at the images. The stories will be archived in the City Library. Visitors were also able to add their own stories in a recording booth.

Penny Tinkler recalls the fascinating stories she heard in the course of the project: “Some interviewees recalled that their broken bones, burns and mild concussion from playing in derelict houses were treated lightly by parents - this was not neglect, but part of a culture of robustness that was essential for surviving and finding pleasure amidst poverty.

“Community was at the heart of everyday life and interviewees had intense memories of the importance of friends and neighbours. The bull-dozing of these so-called slums was remembered in diverse ways. For some it represented an unwarranted destruction of place and community. Others recalled excitement at the new possibilities afforded by living in high rise flats and the novelty of having an inside toilet.”

The Shirley Baker exhibition at Manchester Art Gallery is nominated for a City Life Award alongside the Raqib Shaw exhibition at the University’s The Whitworth gallery. You can vote online in the best art exhibition or event category (Manchester Evening News site).