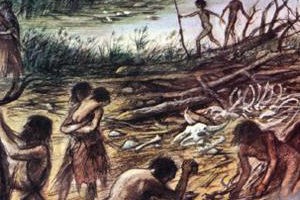 The team from the Universities of Manchester and York reveal today that the home dates to at least 8,500 BC - when Britain was part of continental Europe.

The research has been made possible by a grant from the Natural Environment Research Council, early excavation funding from the British Academy, and from English Heritage who are about to schedule the site as a National Monument . The Vale of Pickering Research Trust has also provided support for the excavation works.

The research team unearthed the 3.5 metres circular structure next to an ancient lake at Star Carr, near Scarborough, a site comparable in archaeological importance to Stonehenge.

The team are currently excavating a large wooden platform next to the lake,  made of timbers which have been split and hewn. The platform is the earliest evidence of carpentry in Europe.

A large tree trunk has also been uncovered by the team. Despite being 11,000 years old it is well preserved with its bark still intact.

The house predates what was previously Britain's oldest known dwelling at Howick, Northumberland, by at least 500 years.

The house, which was first excavated by the team two years ago, had post holes around a central hollow which would have been filled with organic matter such as reeds, and possibly a fireplace.

Universities and Science Minister, David Willetts, said: “This exciting discovery marries world-class research with the lives of our ancestors. It brings out the similarities and differences between modern life and the ancient past in a fascinating way, and will change our perceptions for ever. I congratulate the research team and look forward to their future discoveries.”

The site was inhabited by hunter gatherers from just after the last ice age, for a period of between 200 and 500 years.

According to the team, they migrated from an area now under the North Sea, hunting animals including deer, wild boar, elk and enormous wild cattle known as auroch.

Though they did not cultivate the land, the inhabitants did burn part of the landscape to encourage animals to eat shoots and they also kept domesticated dogs.

Dr Milner said: "This is a sensational discovery and tells us so much about the people who lived at this time.

"From this excavation, we gain a vivid picture of how these people lived. For example, it looks like the house may have been rebuilt at various stages.

“It is also likely there was more than one house and lots of people lived here.

“The platform is made of hewn and split timbers; the earliest evidence of this type of carpentry in Europe. And the artefacts of antler, particularly the antler head-dresses, are intriguing as they suggest ritual activities.”

Dr Conneller said: "This changes our ideas of the lives of the first settlers to move back into Britain after the end of the last Ice Age.

"We used to think they moved around a lot and left little evidence. Now we know they built large structures and were very attached to particular places in the landscape."

Barry Taylor added: "The ancient lake is a hugely important archaeological landscape many miles across.

“To an inexperienced eye, the area looks unremarkable - just a series of little rises in the landscape.

"But using special techniques I have been able to reconstruct the landscape as it was then.

"The peaty nature of the landscape has enabled the preservation of many treasures including the paddle of a boat, the tips of arrows and red deer skull tops which were worn as masks.

"But the peat is drying out, so it's a race against time to continue the work before the archaeological finds decay."

English Heritage recently entered into a management agreement with the farmers who own the land at Star Carr to help protect the archaeological remains.

“We are grateful to the landowners for entering into this far reaching agreement.

“Star Carr is internationally important, but the precious remains are very fragile.

“A new excavation currently underway will tell us more about their state of preservation and will help us decide whether a larger scale dig is necessary to recover information before it is lost for ever.”

An artist’s impression is available.