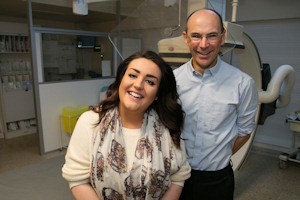 Young stroke survivor Becky Beaumont has been reunited with the University of Manchester cardiologist who operated on her heart after her stroke.

Becky, from Stockport, Cheshire, was just 21 when she had a stroke in 2011. She was in bed and paralysed completely down her left side. Becky was in hospital for two weeks and couldn’t do anything on her own.
While in hospital, Becky underwent tests and found she had a patent foramen ovale (PFO), a trapdoor-like flap that allows blood to pass from the right to left sides of the heart.
In June 2012, she was admitted to University Hospital South Manchester (UHSM) in Wythenshawe to have her PFO closed by Dr Simon Ray, a Consultant Cardiologist at the hospital and honorary professor in the Institute of Cardiovascular Sciences at The University of Manchester. It was a successful surgery.
The Stroke Association and The University of Manchester arranged for Becky to revisit the North West Heart Centre at UHSM and meet Dr Ray, to find out more about the cause of her stroke and the surgery she experienced.
During the visit, which took place on 6 March, Dr Ray demonstrated the intricate device used during the operation, to close the opening in the wall between the two upper chambers of her heart.
Becky also visited an operating theatre and witnessed ultrasound videos of her own heart before and after the surgery, when Dr Ray described the changes made during the procedure.
Becky said: “It was amazing to meet Simon again and see the full extent of what was involved in the surgery. I want to use my story to prove there is life after stroke and I’ll be blogging all about my trip to the hospital. I’m really thankful to the team for arranging the visit and to Simon for everything he has done.”
Dr Ray added: “A PFO is an opening between the right and left side of the heart. It’s rare for them to cause problems but it is possible for a blood clot to travel from the right to the left side of the heart, enter the arterial circulation and cause a stroke.
“There is no firm evidence that a PFO was the definite cause of Becky’s stroke, but she had no other obvious risk factors and therefore we advised it should be closed. It’s wonderful to see Becky fighting fit and living her life to the full after her stroke.”
Becky is now a volunteer for the Stroke Association in Stockport and helps to raise awareness of stroke in young people. She is also a keen blogger and will be blogging about her trip, stroke research and treatment on her blog www.luckygirlbec.blogspot.com.
The blogs will be published in the lead up to Science Stroke Art 2014, a partnership between the Stroke Association and The University of Manchester, to support Action on Stroke Month in May 2014.
For more information about Science Stroke Art 2014, visit www.sciencestrokeart.co.uk. For more information about stroke, ring the Helpline on 0303 30 33 100 or visit www.stroke.org.uk.
ENDS

A stroke is a brain attack which happens when the blood supply to the brain is cut off, caused by a clot or bleeding in the brain. There are around 152,000 strokes in the UK every year and it is the leading cause of severe adult disability. There are over 1.2 million people in the UK living with the effects of stroke.
Stroke Association is a charity. We believe in life after stroke and we’re leading a community of people to change the world for people affected by stroke.  We work directly with stroke survivors and their families and carers, with health and social care professionals and with scientists and researchers. We campaign to improve stroke care and support people to make the best recovery they can. We fund research to develop new treatments and ways of preventing stroke. The Stroke Helpline (0303 303 3100) provides information and support on stroke. More information can be found at www.stroke.org.uk
University Hospital of South Manchester NHS Foundation Trust (UHSM)
UHSM is a major acute teaching hospital trust providing services for adults and children at Wythenshawe Hospital and Withington Community Hospital. We are recognised as a centre of clinical excellence and provide district general hospital services and specialist tertiary services to our local community.
Our fields of specialist expertise - including cardiology and cardiothoracic surgery, heart and lung transplantation, respiratory conditions, burns and plastics, cancer and breast care services - are also provided to patients from much further afield, across the North West and beyond.
The University of Manchester
The University of Manchester, a member of the Russell Group, is one of the largest and most popular universities in the UK. It has 20 academic schools and hundreds of specialist research groups undertaking pioneering multi-disciplinary teaching and research of worldwide significance. According to the results of the 2008 Research Assessment Exercise, The University of Manchester is one of the country’s major research institutions, rated third in the UK in terms of ‘research power’. The University has an annual income of £807 million and is ranked 40th in the world and fifth in the UK for the quality of its teaching and impact of its research.
Some modules are disabled because cookies are declined. Accept cookies to experience the full functionality of this page.
ACCEPT COOKIES
We use cookies to optimize the website, no personal information is stored. Learn more
DECLINE COOKIES ACCEPT COOKIES