Studies advise on fluoridated toothpaste use in children

Studies advise on fluoridated toothpaste use in children 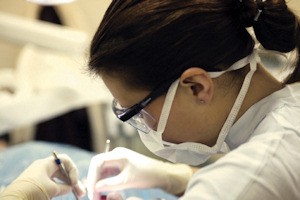 Parents should use toothpastes that contain fluoride with a minimum concentration of 1,000 parts per million to prevent tooth decay in their children, says a new report. Preventing tooth decay can help reduce the need for extensive and costly dental treatments, including extractions.

But the authors, in a second related study, suggest that parents concerned about the risk of fluorosis – the discolouration or mottling of the teeth caused by excessive fluoride ingestion – should consult their dentist to discuss the benefits and risks.

Researchers for the Cochrane Oral Health Group, based at the School of Dentistry, The University of Manchester, have previously shown that fluoride toothpastes reduce dental decay by 24% on average compared to non-fluoride products.

The report suggests that brushing a child's teeth with a toothpaste containing fluoride before the age of 12 months may be associated with an increased risk of developing mild fluorosis. Swallowing large amounts of toothpaste may still cause fluorosis in children up to the age of six years when the permanent teeth are still developing, but using a small amount, carefully, will reduce these risks. After the age of six years, the teeth are fully developed and toothpaste can be used without fear of fluorosis.

Dr Anne-Marie Glenny, an author on the review, said: “It is very confusing for parents to know how to strike the right balance, which isn’t helped by the fact that different companies use different concentrations of fluoride in their toothpastes aimed at children.

“From a public health point of view, the risk of tooth decay and its consequences such as pain and extractions is greater than the small risk of fluorosis. Children would have to swallow a lot of toothpaste over a long period of time to get the severe brown mottling on the teeth, as opposed to the more typical mild white patches.

“For children that are considered to be at a high risk of tooth decay by their dentist, the benefit to health of preventing decay is likely to outweigh the risk of fluorosis. In such cases, careful brushing of their children’s teeth by parents with a small amount of toothpaste containing higher levels of fluoride would be beneficial. If in any doubt, we would advise parents to speak to their family dentist.”