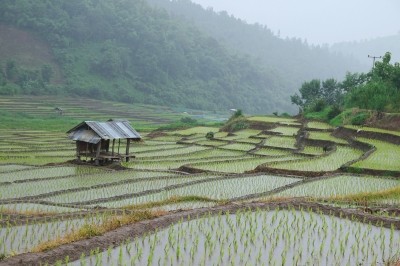 The work could be used to educate better rice grain improvement projects, something that may prove crucial with growing environmental concerns.

The study focused on 3 major types of rice: the long-grain Indica which is non-sticky and mainly found in tropical lowland Asia; Japonica a short-grain rice that produces sticky rice, like the one in sushi and Aus, the drought-tolerant variety that grows in Bangladesh.

Before this study, researchers had thought rice may have been domesticated once or perhaps twice. Scientists had looked at Japonica and Indica because they have had the longest history of cultivation. Some argue that Japonica came first around 10,000 years ago and that Indica emerged as a hybrid form of it a little later. Others contend that both Japonica and Indica have separate domestication events.

However, new analysis from Professor Terry Brown, Dr Peter Civan and colleagues add a third domestication event to the mix by showing evidence that Aus was also domesticated separately in a region from India to Bangladesh.

Our conclusions are in accord with archaeological evidence that suggests widespread origins of rice cultivation. We therefore anticipate that our results will stimulate a more productive collaboration between genetic and archaeological studies of rice domestication.

The team looked at genetic data from 446 samples of different wild rice to see how far back Aus had a commonality with them compared to when other types of rice did. Specifically, they looked at ‘domestication sweeps’ which are specific parts of the genome that differ from wild types and that scientists believe were chosen by early farmers because they had a great advantage to growing more grain. For example, the sweep region includes the ability for rice plants to grow more vertically and so can be planted more densely.

Brown and the team say that the genetic evidence that they have collected shows that these advantageous genes were present in a number of wild type rice varieties that were widely distributed across South Asia. It is therefore possible for farmers from three separate locations to select these wild types with the ideal genes and begin to cultivate them.

But why the big deal about rice? Well rice is thought to have brought about the great civilisations in Asia and led the way for large-scale agriculture to take place. Rice acted as a reliable food source and so large numbers of humans could gather to form large villages and settlements. Understanding how rice was domesticated would allow scientists to get a better understanding of how civilisations grew and moved across Asia.

Professor Brown concludes: "Our conclusions are in accord with archaeological evidence that suggests widespread origins of rice cultivation. We therefore anticipate that our results will stimulate a more productive collaboration between genetic and archaeological studies of rice domestication."