Supporting Ukraine's new music scene in the face of war

Despite Putin waging war on Ukraine, the nation's Composers Union doggedly launched an international festival of new music. Professor Kevin Malone was invited to represent the UK as composer and patron. 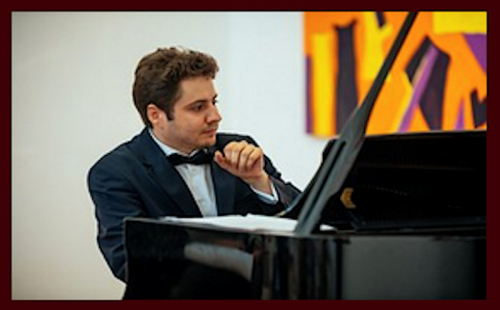 Professor Kevin Malone (Dept of Music) has visited Ukraine 11 times over the past two decades, with over a dozen pieces premiered and broadcast on their national TV and radio networks. With Ukraine enduring a war of survival for its identity and cultural, the country's Composers Union reached out to Kevin for some new music and support. Kevin has been providing personal assistance since March 2022, including help with this year's defiant Kyiv Music Fest held from 24 September to 2 October. The organiser, Igor Shcherbakov, stated that – for the first year ever – not one penny was used from state funding so as to not drain any part of Ukraine's fight against Putin's war. The Composer's Union President requested a piano work from Kevin, the politically charged “The People Protesting Drum Out Bigly Covfefe” (a recent anti-Trump work).  The music consists of chants Kevin has heard at UK and USA rallies over the past six years, carefully notated and then scored as a piano fantasy re-enacting the voice of oppressed and unheard peoples.  The piece was performed in Kyiv but not officially listed within the festival programme, since it could be wilfully misconstrued. The sheer bravery of the festival organisers, musicians, venue managers and audience comes as no surprise to Kevin: their world-class artistry is something to fight for.