Tanks on the A56: Soviet invasion plan on show
Newsroom

Tanks on the A56: Soviet invasion plan on show 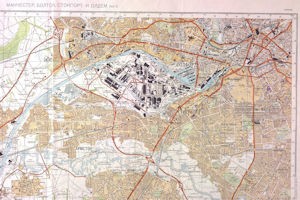 A map showing the route that Soviet tanks would have taken during an invasion of Manchester forms part of a display at an international conference this week.

The map - one of 80 in an exhibition at The University of Manchester's John Rylands Library - is part of the backdrop to a reception during the Royal Geographical Society (with IBG)’s annual conference.

They also added secret information left out of Ordnance Survey maps from 35 years ago, such as Strangeways Prison and the Risley Moss nuclear research site.

University of Manchester Geography Lecturer and curator Chris Perkins said: "This and other maps in our exhibition called Mapping Manchester reveal a very different side to this city.

"It shows the roads - familiar to many Mancunians - which the Soviets felt were wide enough to carry tanks including Washway Road, the Mancunian Way, and Princess Road.

"They even transliterated place names - such as Urmston, Salford and Stretford into Russian.

"Quite unnerving really as the map - and their intelligence - is only 35 years old.

"It's incredible how detailed their information was.

”After declassification by the Russians at the end of the cold war, these maps became available on the international market.

He added: "The Soviet military who compiled the maps used aerial sources such as spy planes and satellite imagery, to supplement information from UK Ordnance survey maps and publicly available road atlases and trade directories.

"But there's so much extra information, it would be fair to assume that they were able to gather a considerable amount of intelligence on the ground.

"No doubt NATO were doing similar things in Russian cities."

Other highlights of the Mapping Manchester exhibition include a excerpt of the first large scale survey of the city published by William Green in 1794.

And a 1945 map shows how the city centre was slated for transformation into a modernist utopia along the lines of inner city Birmingham. Thankfully the plans never went ahead.

A 1914 "isochron" map, produced by Manchester Council, shows how long it took to commute to the city centre.

It was created to promote a tramways initiative, echoing the rejected Transport Innovation Fund congestion charge proposals of last year.

And an 1889 map of licensed alcohol sellers produced by the United Kingdom Alliance - one of the period's temperance societies - showed the many alcoholic hotspots of boozy Victorians.

The University of Manchester

The Royal Geographical Society (with The Institute of British Geographers) is the learned society and professional body for geography. Formed in 1830, its Royal Charter of 1859 is for 'the advancement of geographical science'. Visit www.rgs.org. The Society’s annual international conference takes place from 26 to 28 August at The University of Manchester, for full details visit www.rgs.org/AC2009