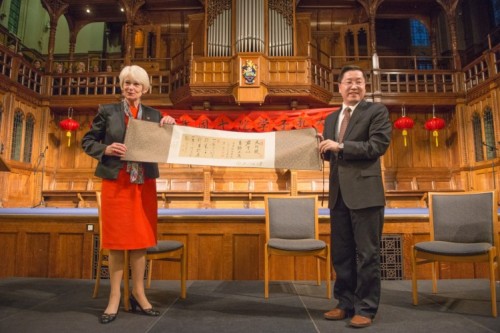 Key national and international figures from the Chinese community came together yesterday at The University of Manchester to celebrate the 10th anniversary of the Confucius Institute, an organisation which endorses Chinese language and culture.

The celebratory event was hosted by Professor Keith Brown, VP and Chair of Confucius Institute Board and included speeches from Professor Zhou Zuoyu, Vice President of Beijing Normal University and Professor Dame Nancy Rothwell who shared her vision of collaboration with China.

Professor Rana Mitter was joined by the University’s Professor of Public History and filmmaker, Michael Wood to host an open discussion on China’s representation in the media where Michael spoke about his recent BBC series, The Story of China. The programme received an overwhelmingly positive response from the public in both Britain and in China, setting out to counterbalance some mainstream western narratives of the nation by showing its real heroes – the people.

Guests were treated to poem recitals by University of Manchester student Chloe Haimes as well as musical and dance performances by students from Gelddings Preparatory School, Bolton Junior Boys and St Paul’s CE Primary School, all of which were composed by University students.

The Confucius Institute has not only enriched the cultural life of Manchester through contribution to  film, literature, history and science - it has also promoted and enabled the learning of the Chinese language in local schools and communities.

The Institute, which promotes a contemporary China to the people of the North West, encourages learning, teaching and testing, and maintains and improves education exchange and engagement with China itself. It has become a centre of excellence in Chinese language teaching thanks to joint efforts of Beijing Normal University and Hanban, the headquarters of Confucius Institute which seconds teaching staff and provides invaluable resources.

The Confucius Institute has led the nation’s largest student mobility project, Study China Programme, for the past ten years, enabling over 5000 UK students to visit the country, providing them with a unique opportunity to experience Chinese life, culture, language and business. The success and impact of the programme has seen it be extended over the next five years.

More details can be found on the Confucius Institute’s website.