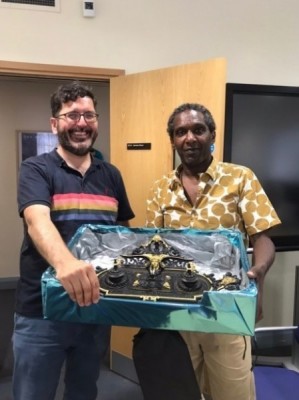 After 7 years, Lemn Sissay has come to the end of his tenure as Chancellor of The University of Manchester. We are delighted to announce that Lemn will continue as Creative Manchester ambassador and has also been appointed as Honorary Professor of Creative Writing.

Lemn’s contributions in his time with the University have been remarkable, whether that be his work with local communities or his active role in literature across the North West. This included his commitment to widening access and removing barriers to those commonly under-represented, such as through his introduction of the Lemn Sissay Law Bursary.

We, at Creative Manchester, are particularly grateful to Lemn, who supported the platform from its inception as an ambassador and has collaborated with us on several research projects and events. In particular, for the past six years, he has served as Lead Judge on our Micropoetry Competition, including for this year’s theme of Climate Change.

We look forward to exciting future collaborations with Lemn during the forthcoming year.

Lemn Sissay is pictured above with John McAuliffe, Creative Manchester Director and Professor of Poetry.