Manchester Confucius Institute has been providing a host of workshops, performances and activities for the Greater Manchester area.

This year, Manchester Confucius Institute collaborated with Manchester Airport in its community outreach efforts by hosting workshops and events around Manchester to celebrate Chinese New Year. 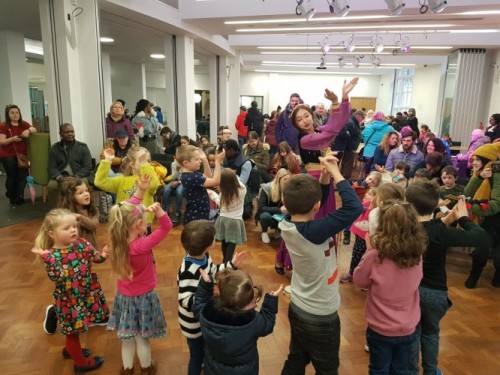 The Institute - which is a partnership between The University of Manchester, the Office of Chinese Language Council International (Hanban) and Beijing Normal University - attended 12 different schools and provided workshops to several hundred children, while also visiting businesses such as Manchester Airport and City Tower. The visits gave staff the chance to learn brush painting, calligraphy, Chinese knot making and some Mandarin language.

Over the Chinese New Year weekend, the Institute celebrated with families in Manchester city centre.

With this year being the Year of the Rat, families made paper rats using Chinese paper folding and wore temporary tattoos featuring the unique Confucius Institute Year of the Rat illustration. There was entertainment in the Arndale Centre, while shoppers in Selfridges were treated to traditional tea ceremonies and calligraphy.

After the success of last year’s event at Central Library, the Institute hosted activities there again on Sunday. This included a Guzheng performance, a dance workshop, a Dizi performance and finishing with a Tai-chi workshop. The institute was also invited to be part of Manchester Art Gallery’s celebrations, which saw a high turnout of families who took in traditional Chinese Folk Dance, participated in a live drawing session, and watched a Guzheng performance.

At the Virgin Money Lounge, there was Chinese brush painting. Participants had the choice of painting onto traditional Xuan paper, or a Chinese fan which provided a wonderful keepsake.

To conclude Chinese New Year 2020, the Institute held its annual Gala for schools, welcoming a team of performers from China to entertain students with a colourful and action-packed show of acrobatic skills, juggling, contortion, Chinese opera and of course the auspicious Lion Dance. This year was the Institute's best selling Gala yet and organisers are already excited for next year's outing.

"It’s always exciting to see our schedule grow each year, with more and more people wishing to celebrate Chinese New Year with us. From all of us at MCI, we would like to wish you a happy, healthy and prosperous Year of the Rat," said the Institute.