The city that never was: 40 years of plans for Manchester go online
Newsroom

The city that never was: 40 years of plans for Manchester go online 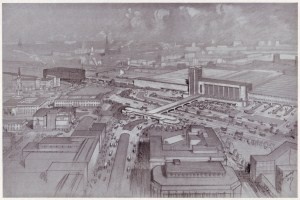 Eight reports spanning 40 years of what planners wanted and often failed to do in Manchester have been made available to the public, in the first project of its kind in the UK.

The plans, which can be viewed at www.mappingmanchester.org/plans, cover an important period in the city’s history - from the 1920s through wartime reconstruction and 1950s austerity to the end of the ‘swinging’ 1960s.

The project, a collaboration between The University of Manchester and Manchester City Council, shows how the city could have looked very different if the professionals had got their way. The plans included:

The plans also contained many zoning schemes to reorganise land-use, proposals for new and improved housing and calls for investment in bigger roads and better transport infrastructure.

The digitisation of these substantial documents, which can be browsed in their entirety online, was made possible by funding from the Manchester Statistical Society.

Geographer Dr Martin Dodge, from The University of Manchester, said: “These reports were authored by an elite cadre of politicians and planning officers who saw themselves as obligated to solve the problems of the ‘uneducated’ masses.

“To some, this could be seen as paternalistic and condescending, though it is clear they were driven by a genuine egalitarian desire to bring some order to the city and its satellite towns after a century of chaotic and unrestrained growth.

“We created a monster and by the 1920s, the public and press were clamouring for local government to make it a more liveable place, with an infrastructure that worked."

The reports also chart the ‘population problem’, documented by Friedrich Engels in the mid-nineteenth century, of too many people being crowded into the central areas of Manchester.

Over the decades, these plans proffered a range of ‘solutions’, through planned population decentralisation, slum clearance, rehousing and the construction of ‘garden’ suburbs and large overspill estates well beyond the boundaries of Manchester proper.

Councillor Rosa Battle, Manchester City Council’s Executive Member for Culture and Leisure, said “We are pleased that by working in collaboration with the University of Manchester, we have been able to make these beautifully illustrated plans freely accessible online.

"The collection offers a unique look at our predecessors' visions for how the city could have been reshaped. It will be of huge interest to anyone with a passion for the history of Manchester.”

University of Manchester geography student, Joe Blakey who worked on the project, said: “Given Manchester's rich heritage it's common for people to consider what once was, but less so what could have been.

“As a local, it was a privilege to be able to handle the documents first hand. My curiosity at the plans inevitably fuelled my enthusiasm to scan the many pages that they entail.

“The Mancunian landscape in which I grew up could have been drastically different, provoking questions as to why some of the plans were never realised.

“With these digitised versions, everyone has the opportunity to share these considerations - not just academics, but those with a casual interest in Manchester’s history too.”

Dr Dodge and Joe Blakey are available for interview

The eight digitised reports are available via www.mappingmanchester.org/plans