The four items were loaned to the exhibition 'Gutenberg & After, Europe’s first printers 1450-1470' 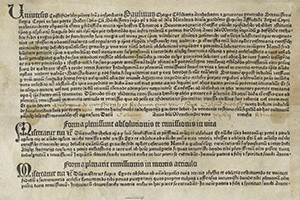 The John Rylands Library has loaned four items from its Special Collections to a Princeton University exhibition about early European printing.

The exhibition examines the first two decades of European printing after Gutenberg’s invention of typography, which eventually revolutionized the world of text production and distribution.

"The outstanding collections at the John Rylands Library include many landmarks in early European printing, part of the Spencer library purchased by Enriqueta Rylands in 1892,” said Julianne Simpson, Special Collections Research Engagement Manager.

Princeton University owns one of the world’s great collections of earliest European printing through the work of John and William Scheide. This exhibition has displayed these collections alongside contributions from other American libraries, The John Rylands Library, Cambridge University Library and the Devonshire Collections in Chatsworth House.

The contribution from The John Rylands Library, which have all been digitised, are:

This 30-line indulgence was printed in 1455 and is the earliest of nine surviving examples which were authorised for the archdiocese of Cologne. It uses the same type as the Gutenberg Bible for the titling and a different text type which was modelled on a gothic hybrid script. An indulgence granted full or partial remission of the punishment of sin.

The types used in this book were probably made by Gutenberg after his bankruptcy, when Johann Fust and Peter Schöffer took ownership of his first workshop. As argued in the exhibition Gutenberg continued his experiments to improve the speed and efficiency of printing in Eltville near Mainz.

Vier Historien (Four Histories) is a typographic book illustrated with woodcuts that narrates the Old Testament stories of Joseph, Daniel, Judith and Esther.

This series of woodcut scenes were created for Cardinal Juan de Torquemada, head of the Dominican order, to accompany his meditations. It is the first printed literary work of a living author. The Cardinal was one of several grandees of the Roman church who took a personal interest in the 1450s and 60s in the new discovery of typography.