The reason we lose at games

The reason we lose at games 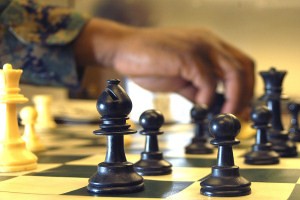 If you have ever wondered why you never seem to win at skill-based games such as poker or chess, there might be a very good reason.

Writing in PNAS, a University of Manchester physicist has discovered that some games are simply impossible to fully learn, or too complex for the human mind to understand.

Dr Tobias Galla from The University of Manchester and Professor Doyne Farmer from Oxford University and the Santa Fe Institute, ran thousands of simulations of two-player games to see how human behaviour affects their decision-making.

In simple games with a small number of moves, such as Noughts and Crosses the optimal strategy is easy to guess, and the game quickly becomes uninteresting.

However, when games became more complex and when there are a lot of moves, such as in chess, the board game Go or complex card games, the academics argue that players’ actions become less rational and that it is hard to find optimal strategies.

This research could also have implications for the financial markets. Many economists base financial predictions of the stock market on equilibrium theory – assuming that traders are infinitely intelligent and rational.

This, the academics argue, is rarely the case and could lead to predictions of how markets react being wildly inaccurate.

Much of traditional game theory, the basis for strategic decision-making, is based on the equilibrium point – players or workers having a deep and perfect knowledge of what they are doing and of what their opponents are doing.

Dr Galla, from the School of Physics and Astronomy, said: “Equilibrium is not always the right thing you should look for in a game.”

“In many situations, people do not play equilibrium strategies, instead what they do can look like random or chaotic for a variety of reasons, so it is not always appropriate to base predictions on the equilibrium model.”

“With trading on the stock market, for example, you can have thousands of different stock to choose from, and people do not always behave rationally in these situations or they do not have sufficient information to act rationally. This can have a profound effect on how the markets react.”

“It could be that we need to drop these conventional game theories and instead use new approaches to predict how people might behave.”

Together with a Manchester-based PhD student the pair are looking to expand their study to multi-player games and to cases in which the game itself changes with time, which would be a closer analogy of how financial markets operate.

Preliminary results suggest that as the number of players increases, the chances that equilibrium is reached decrease.  Thus for complicated games with many players, such as financial markets, equilibrium is even less likely to be the full story.

The paper, Complex dynamics in learning complicated games, by Tobias Galla and J. Doyne Farmer, is available on request from the Press Office.

Dr Galla is available for interview on request.