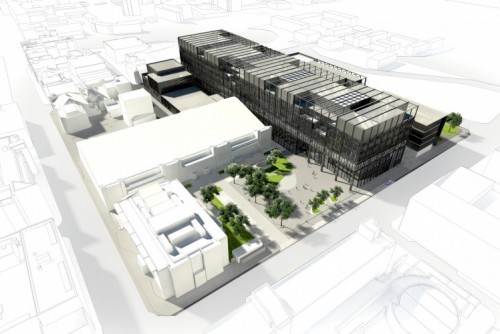 The University of Manchester has announced that it is to invest £350 million to create a new engineering campus.

The Manchester Engineering Campus Development (MECD) will be one of the largest, single construction projects ever undertaken by a higher education institution in the United Kingdom and will transform the way in which the University educates future engineers in response to the needs of the fast-changing global economy.

The build – due to open in 2020 – is part of the University’s campus master plan to create a world-leading teaching, learning and research campus to develop the engineers and innovators of tomorrow.  The new site will act as a gateway between the existing University of Manchester site and the city and will be located opposite the new National Graphene Institute on Booth Street East.

Mecanoo, the architects behind HOME – a new centre for international contemporary art, theatre and film in Manchester – have been appointed to the project and tasked to build a campus which will open its doors to the public and reinforce Manchester’s status as a city of science. The new campus will be a destination where world-changing engineering and applied science is on display and visible to all.

The campus will help demonstrate how UK engineering is one of the most creative industries in the world – a key feature on the ground floor of the main hall will be a dedicated ‘maker space’ which will provide dynamic workshops for students and academics to share ideas and innovate.

Professor Martin Schröder, Vice-President and Dean of the Faculty of Engineering and Physical Sciences at the University, said: “This outstanding new campus development will build upon our proud heritage of innovation and discovery across engineering and science that began with the establishment of the Manchester Mechanics’ Institute in 1824.

“MECD will inspire engineers to continue our pioneering spirit and to apply their knowledge and help modern industry overcome global challenges, such as climate change, finite natural resources and changing world markets.”

MECD will inspire engineers to continue our pioneering spirit and to apply their knowledge and help modern industry overcome global challenges, such as climate change, finite natural resources and changing world markets.

Once complete, the Manchester Engineering Campus Development will become home to the University’s four engineering schools and two research institutes from the Faculty of Engineering and Physical Sciences.  It will include extensive, modern teaching spaces that reflect the changing demands of students and staff for mobile and flexible learning. Cutting-edge technologies will enable students across all disciplines to engage with new modes of teaching and become part of the global classroom.

The MECD project is being delivered through the Construction Partnering Framework. Balfour Beatty is one of the framework partners appointed in June and the University has begun an engagement process with Balfour Beatty as its construction partner on the scheme. Demolition of the former Grosvenor Halls of Residence has already begun and will conclude during the first half of 2016.

The University of Manchester is inviting local residents, businesses and stakeholders the opportunity to attend an exhibition of plans for the new engineering campus. The drop-in session will be held on Thursday, 10 September, at the James Chadwick Building, 4th floor, EBL Room 6 from 3-7pm.