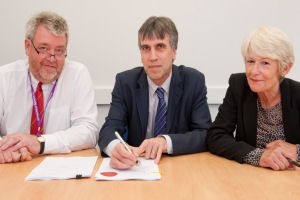 Bonds assigned a rating of Aa1 by Moody's

Not for release, publication or distribution, directly or indirectly, in or into the United States or any other jurisdiction where to do so would be unlawful.


The University of Manchester today announces that it has issued £300 million in principal amount of its 4.25% Bonds due 2053 (the “Bonds”).

The Bonds have been assigned a rating of Aa1 by Moody's, and were priced at a spread of 0.80% over the relevant reference gilt.

The University will use the net proceeds from the Bonds for general corporate purposes, including the continuation of its £1bn Campus Master-plan.

Professor Dame Nancy Rothwell, President and Vice-Chancellor of The University of Manchester, said: "We are delighted by the success of this issue, and by the strong support shown by investors in the University and its mission.

“The proceeds will allow us to further our ambition to be a truly world-class university by delivering a single, outstanding campus for The University of Manchester, with our beautiful old buildings standing alongside the very best modern facilities for our research and our students.”

Barclays, HSBC and The Royal Bank of Scotland acted as Joint Bookrunners and National Australia Bank as Co-Manager, and Rothschild provided independent debt advice to the University.

Any investment decision made in connection with the Bond issue MUST be based solely on the information contained in the final Prospectus dated 2 July 2013 relating to the Bonds.

The University of Manchester, a member of the Russell Group, is one of the largest and most popular universities in the UK. It has 20 academic schools and hundreds of specialist research groups undertaking pioneering multi-disciplinary teaching and research of worldwide significance. According to the results of the most recent Research Assessment Exercise (2008), The University of Manchester is one of the country’s major research institutions, rated third in the UK in terms of ‘research power’. The University has an annual income of £807 million and is ranked 40th in the world and fifth in the UK for the impact of its research.