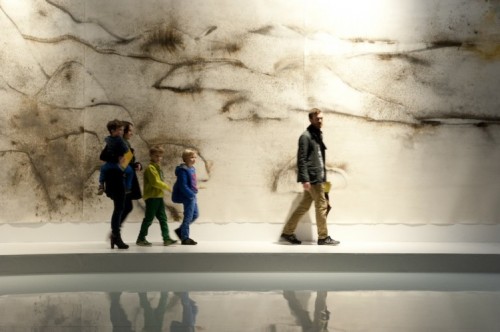 At the awards ceremony, held in London on Friday 9 October, the Whitworth was among a select band of award winners which included the Museum of Modern Art, New York and Centre Pompidou, Paris.

The award is the latest in a succession of major prizes for the gallery which reopened in February 2015 following a major £15m refit.  The renovation was the largest in the Whitworth’s 125-year history, doubling its former size, with a new glass wing overlooking Whitworth Park.

Other highlights of the revamped attraction include the galleries, housing exhibitions by Cornelia Parker and Cai Guo-Qiang, open corridors, work spaces, the reopened Victoria Grand Hall and the ‘cafe in the trees’.

These improvements have led to the gallery being named North West Building of the Year, Museum of the Year 2015 and next week (15 October) will see the announcement of the RIBA Stirling Prize for which the Whitworth is up against five other outstanding architectural developments in the UK.

Members of the public are able to take part in a vote which will accompany the judges’ decision on the Stirling Prize on the BBC website.