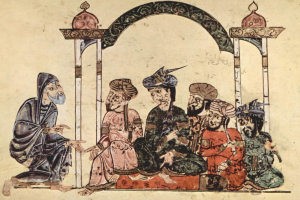 A little-known eleventh century guide to gatecrashing containing gags by an otherwise revered Muslim preacher from Baghdad has been translated into English.

Dr Emily Selove from The University of Manchester, who carried out the work, says the book by al-Khatib al-Baghdadi challenges ill-informed  ideas about Arab culture and history.

The Art of Party Crashing, published this month by Syracuse University Press, is a tongue in cheek compilation of stories, advice and anecdotes on gatecrashing a party.

The tome even contains a piece of satire: a fictional document commissioned by a Caliph on the creation of a ‘Government office for Gatecrashing’.

The writer - a renowned scholar of the Prophet Mohammed’s teachings  – wrote the book to remind readers ‘that every serious minded person needs to take a break.’

Jokes, he recommended, were among the best ways to blag your way into a party as an uninvited guest.

The book refers to the most famous gatecrasher of the time,  ‘Bunan’, an apparently  likeable rogue who Dr Selove says can be likened to a cross between Falstaff and Robin Hood.

The researcher based in the University’s School of Arts, Languages and Cultures, said: “This book, which contains flirtation, profanity, and even a little drunkenness, is a lot of fun and offers a rather different perspective to the austere image Islam has from that period.

“The reality is that the Bagdad of 1,000 years ago was actually rather Bohemian -  it wasn’t perfect by any means – but not the violent and repressive society you might imagine it was.

“Such ignorance is probably down to the fact that so little of the huge body of literature produced at that time has been translated  into English. There’s so much more to do.”

But she added “Though it’s light and really quite an enjoyable read, there are serious messages too.

“The book is about generosity and encouraging individuals to express themselves eloquently and clearly.

“It also suggests that turning a hungry person away from a place laden with food was cruel – as food was sometimes in short supply to the poor.

“It castigated those who turned gate crashers away from parties as misers. You do not turn people away if they are hungry.”

Also according to the book, the twelve features of meal-time that Muslims should learn:

A selection of seven jokes, a piece of advice, and a poem from the book are available.

Two jokes from the book:
“Once a man crashed another man’s party. ‘Who are you?’ the host asked him. ‘I’m the one who saved you the trouble of sending an invitation!’ he replied.”

“A party-crasher walked into a gathering, and they said to him, ‘Nobody invited you!’. ‘But if you didn’t invite me and I didn’t come, he replied, ‘think how lonely that would be!’