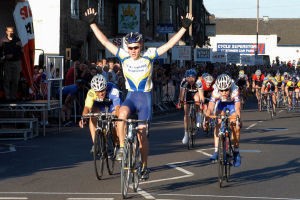 Cycling chemistry student Richard Hepworth is hoping to pedal his way to success for Great Britain - before speeding back to Manchester for his final exams.

The talented athlete, who is in his final year of his studies in The University of Manchester’s School of Chemistry, believes he has a genuine chance of glory at the World University Cycling Championships in the Netherlands.

The Batley-born road racer will dash off to the World University Cycling Championships on Monday evening (19 May) - just hours after sitting one of his crucial final year exams.

After competing in the men’s road race on Sunday 25 May, he will rush back to Manchester to sit another exam the next day (Monday 26 May).

Richard’s last examination is on 2 June and straight after that he plans to turn professional – hopefully with a high-quality science degree under his belt.

Aside from swotting hard for his finals, Richard – who races with full-time professionals in the Elite category of road racers – has managed to cram in up to 500 miles of training every week. It’s also not unusual for him to also compete in three road races during a week, with distances totalling another 150 miles.

Richard says staff in the School of Chemistry has been very supportive of his cycling, organising secure places for him to store his high-tech training bike – worth several thousand pounds. They have also made shower facilities available for him, so he can jump off his bike after training, pull on a white coat and head straight for the labs.

Richard has successfully bounced back from a disastrous season last year, where a knee injury and tonsillitis ruined his chances of success. Aside from a lack of injuries, he puts his improved performance this season down to the guidance and coaching of Bernard Burns, a former professional and national coach.

And it looks like all his hard work on the bike may be about to pay dividends, with Richard quietly confident about his chances of success in the student Championships.

The University's Director of Sport, Alison Odell CBE, said: "We are very proud of Richard’s success. He has shown extreme dedication to his studies and sport, which will stand him in good stead for a professional career in cycling. I wish him the best of luck at the World University Cycling Championships and hope that he succeeds in his bid to compete in the 2012 Olympics."

Richard, who lives in Fallowfield, regularly cycles back home to Batley to see his family as part of his training, heading out through Ashton towards Mossley and into the Pennines.

Once he leaves University, he’s hoping to join a top racing team in the UK and is targeting a place on the Great Britain team at the London 2012 Olympics.

Richard says he draws inspiration from top riders like Spaniard Alejandro Valverde, the highest paid professional cyclist in the world. Richard has come to know Valverde during visits to Spain and has trained with him on several occasions.

Richard started cycling at the age of nine, encouraged by his dad Mark Hepworth who was a top-class cyclist in his own right. After joining local club Batley CC, Richard started racing competitively at 13 – and won his first race.

Further glory followed in his teenage years, as he won the junior National Championships for three years in a row.

He was supported by a Talented Athlete Sport Scholarship in his first year of studies at The University of Manchester.

A photograph of Richard is available for download by clicking here.

Richard is also available for interview.