Metrolink customers will be transported to another world on their journey during this week’s City of Science Festival (22-29 July), thanks to a collaboration with The University of Manchester’s School of Physics and Astronomy.

Customers travelling on specially branded ‘Astrotrams’ can take a tour of the universe and gaze up at the night sky and our expansive universe.

Astrotram ceilings will be filled with astronomy facts and interactive triggers and customers who download the free SciMan app can play augmented reality videos, bringing science to life.

Passengers on Metrolink stops will also be treated to intergalactic facts from Professor Brian Cox.

It’s all thanks to collaboration between Transport for Greater Manchester (TfGM), the School of Physics and Astronomy at The University of Manchester, the University of Salford, and the European City of Science programme.

On Wednesday 27 and Thursday 28 July, passengers on the two specially branded Astrotrams and at city centre tram stops will also be treated to live experiments by science buskers.

Join in the interactive fun by downloading the SciMan app, and by following @MCRMetrolink on Twitter and using #ASTROTRAM. 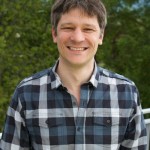 We still continue the tradition of cutting-edge science and want to show Manchester that they are a part of it. There is nothing like a tram commute to daydream… about our universe

Peter Cushing, Metrolink Director for Transport for Greater Manchester (TfGM), said: “We’re delighted to bring these Astrotrams on board the network to help bring science to life for our customers during the exciting City of Science Festival.

“With free WiFi onboard all trams, people can download the SciMan app for free and learn about science on their journey, while passengers on Metrolink stops will be treated to intergalactic facts from none other than Professor Brian Cox.

“Anyone can join in by following #ASTROTRAM on social media. I look forward to seeing people’s videos of science buskers on trams and at city centre stops.”

Dr Rene Breton, Lecturer in astrophysics at the University of Manchester said: “Manchester has a rich heritage of physics and astronomy discoveries ranging from Rutherford first splitting the atom, to Lovell pioneering radio astronomy at Jodrell Bank, to Geim and Novoselov isolating the properties of grapheme.

“We still continue this tradition of cutting-edge science and want to show Manchester that they are a part of it. There is nothing like a tram commute to daydream… about our Universe.”

Dr Annie Keane, Director of the European City of Science Programme said: “The partnership between the universities and Transport for Greater Manchester gives a unique addition to the Science in the City festival programme.

“We hope people taking a tram will be entertained and educated as they travel on a journey through the Milky Way, unlocking the secrets of the Universe on this very special app.”

The festival runs alongside the EuroScience Open Forum (ESOF), marking Manchester’s designation as European City of Science, and is designed to engage and inspire everyone, from the next generation of scientists to anyone of any age with an interest in the world we live in.