Trevor Noah is right. People can be both French and African
Newsroom 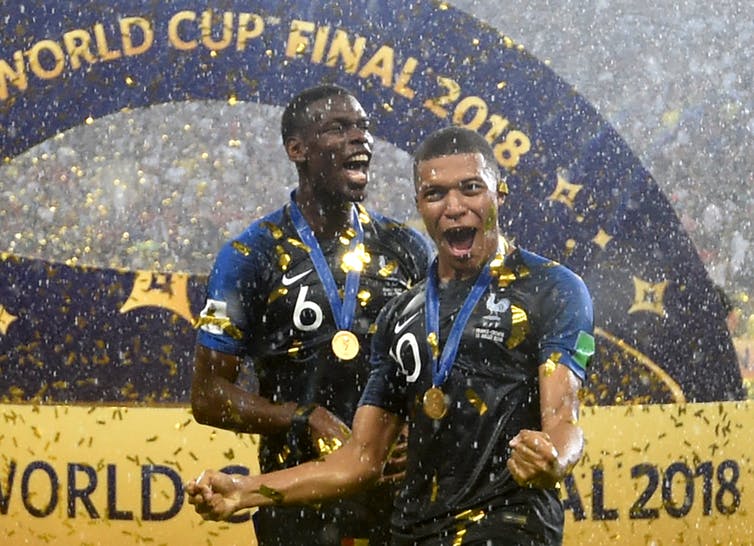 Trevor Noah is right. People can be both French and African

The afterglow of France winning the 2018 World Cup tournament on July 15 should be gone by now. But the arguments over France’s 23-man squad, with as many as 15 players with African roots, rage on. The victory has ignited social commentaries on race, immigration and national identity across the international terrain.

But it was a joke that set the cat among les pigeons. Two days after the final, Trevor Noah – host of the late-night American TV talk programme, “The Daily Show” – jokingly alluded to France’s World Cup triumph as an indisputable bilateral “win-win” for Africa(ns):

Africa won the World Cup… I get it, they have to say it’s a French team, but look at those guys. You don’t get that tan by hanging out in the South of France, my friends.

As a British Nigerian – and as such part of the worldwide, transnational African diaspora community – I, along with multiple other Africans, both continental and diasporan, basked in the reflected glory of Noah’s sentiment as we congratulated the French team from afar.

However, the French Ambassador to the US, Gérard Araud, didn’t think the South African-born comedian’s joke was funny. He sent an indignant official letter to Noah the very next day saying that nothing could be less true than his quip about “an African victory”. He added:

Unlike the United States of America, France does not refer to their citizens based on their race, religion or origin. To us, there is no hyphenated identity, roots are an individual reality. By calling them an African team, it seems you are denying their Frenchness. This, even in jest, legitimises the ideology which claims whiteness as the only definition of being French.

That evening on his show, Noah stood by his satirical comments. He argued that Araud was in fact tippexing out the African identities of the French players:

Why can’t they be both? What they’re arguing here is: in order to be French they have to erase everything that is African.

It’s this dual identity argument where the crux of the tension lies – an issue I’ve explored in my research on the identities of African diaspora communities.

In his letter Araud said this to Noah about the African-rooted French players:

By calling them African, it seems you are denying their Frenchness.

As such, both ambitious and irrational, Araud’s comments suggest that national identity transcends and supplants the assumed limitations of racial and ethno-cultural heritage. That it renders their heritage wholly irrelevant and unreconciled.

A person is simply French – and unequivocally so. Within this speculative proposition, and unsolicited moral evaluation of the veracity of one’s identity, are we to assume that forward Kylian Mbappé’s Algerian and Cameroonian roots are annulled? Or, that midfielder Paul Pogba’s “Guinean-ness” is a mere figment of his “undiluted French” imagination?

No. It would be utterly naïve and ill-advised to arrive at such conclusions.

If there is one thing that my research on the identities of African diaspora communities has taught me, it is that they are seldom tethered to the extremities of irreconcilably divided loyalties of “you’re either this”, or “you’re that”. Rather, identity boundaries for African minorities are necessarily blurred, inconsistent, situationally-driven, provisional, dynamic and transformational. They often lend themselves to progressive hyphenation in strategic and unconscious ways.

These convoluted identity configurations are appropriated and remastered by black and brown folk in their daily attempts to make “meaning” legible in their lived and racialised realities. Within this frame, it is important to understand that the African diaspora constitutes complex and multiplicitous identities. It is not for others then – especially white privileged others – to provide the unsolicited space within which their identities are defined, confined and deemed as comprehensible.

Ultimately, this removes the agency of choice in African “Self”-definition. It also renders all French-situated diaspora as a vast horde of undifferentiated masses devoid of individual intent. It begs the question, if it is true that “roots” are “individual reality” as Araud proclaims, then why implicate the French African players in all-inclusive assimilationist narratives? Where’s the individuality in that?

Suffice to say, it is this hybridity that has affixed my “British” to “Nigerian”, “English” to “Yoruba”, and the “Afro” to my “European” – all coexisting in their complementary contradictions.

If anything, the argument between Noah and Araud implores a rethinking in how France engages with identity, especially for African diaspora communities. It should go from treating it as a conspiratorial affront to its nationalism, and aspirations of a common peoplehood, to conceiving it instead as an enrichment.

By doing this, we consciously engage with African-descended minorities and their hybrid identities in ways that are as multiple and diverse as the football players that compose them.

So yes, Noah is right. The players, and many other people, can indeed be both French and African.