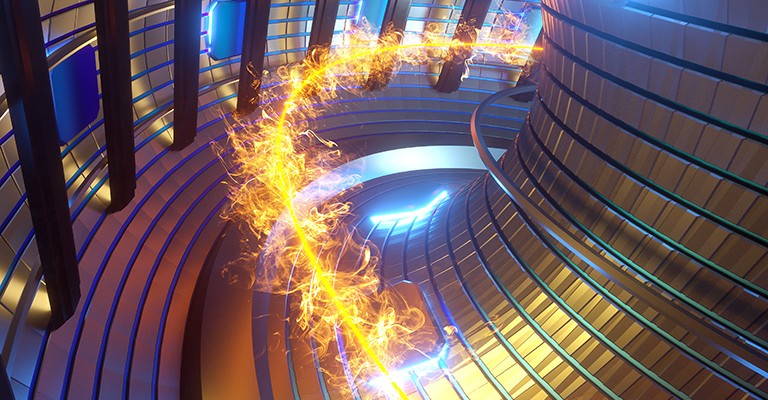 Turning fusion from a dream to reality: Panel discussion for Manchester Festival of Climate Action

Nuclear fusion is the process that drives the Sun. Unlike traditional nuclear power, which involves splitting nuclei, fusion fuses nuclei together, liberating huge amounts of energy. It has the potential to be an abundant source of power that has very low carbon dioxide emissions.

While fusion research has been ongoing for many decades, it is at a stage of huge growth, with ITER being built, the new UKAEA STEP programme, and a huge number of private companies entering the scene. Nevertheless, significant challenges remain that must be overcome before fusion power is connected to the grid.

On 14 October 2021, The University of Manchester hosted a panel discussion around the topic of how to make fusion power a reality. The panel was hosted by Dr Aneeqa Khan, a research fellow in nuclear fusion at Manchester, and panellists were from a broad range of backgrounds – resulting in a very fruitful and thought-provoking discussion. Each of the panellists were asked what they thought needed attention in order to get fusion power on the grid.

Andrew Holland, Chief Executive Officer of the Fusion Industry Association and representing many new private companies, kicked things off by highlighting the need for the US government to fully back fusion energy development, suggesting that only this government has such an ability from his perspective.

This was followed by Sabina Griffith, Communications Officer at the ITER Organization, an international collaboration between seven member states to build a tokamak, saying that a more collaborative approach is required, and not reliance on one country. She stressed the importance of investing in global collaborations. She also highlighted the importance of education and training, making sure the new generation is suitably qualified to bring fusion onto the market. Close collaboration with industry was also said to be key, developing robust supply chains to accelerate the progress of fusion.

Attendees then heard from Dr Kate Lancaster, a lecturer based at the University of York, with extensive experience in Inertial Confinement Fusion (ICF), one of the techniques being pursued in fusion where tiny pellets of deuterium and tritium are compressed repeatedly for very short periods of time. She discussed the latest results from the National Ignition Facility, Lawrence Livermore National Lab, showing that ICF is in a really exciting and promising place, but that technically there is still a lot of work involving innovative approaches to move from being scientific research to industrial feasibility.

Following this, attendees heard from Dr Greg De Temmerman, the Managing Director of the Zenon Research Think Tank, with previous experience at the ITER Organization, the Dutch Institute for Fundamental Energy Research and the UK Atomic Energy Authority. He spoke about the importance of timescales, and being realistic about the context within which fusion sits. As a community, he said researchers need to try many different options and be honest about failure. It does not matter if many options fail, as long as something works, referencing projects such as the Apollo space missions. He also highlighted the importance of fusion moving away from being a purely scientific endeavour – which is of course interesting – but with the urgency of the climate emergency, a more industrial approach is required. The fusion community needs to be clear that its mission is to deliver energy.

Emre Yildirim, a PhD student at The University of Manchester as part of the Fusion Centre for Doctoral Training, then discussed the importance of developing tritium production capabilities on a large scale. With tritium only having a half life of 12 years, and current tritium stores coming predominantly from CANDU nuclear fission reactors, it is vital that tritium development capabilities are prioritised. This is because without enough fuel for the 'Deuterium-Tritium' reaction being pursued, even if all other technical challenges are solved, scaling up power production would be very difficult without the fuel resources needed.

The event ended with Professor Catherine Alexander, a social anthropologist at Durham University who is interested in large scale scientific collaborations, having worked in other industries with similar structures previously. She again highlighted the importance of being honest about failure, and that failure is not always a bad thing. When estimating delivery dates, people should not work back from time frames such as 2050, but be honest about how long it takes to do things. She addressed the conflict that can arise between scientific interests and politics more broadly, from which fusion is not immune. She also said that in general there cannot be a reliance on 'techno-fixes' for climate change, but a need to address how much energy is being used, for what, and who is using it. Otherwise there is a risk of perpetuating environmentally-damaging processes, global socioeconomic inequalities and chasing after unsustainable growth for a select few.

This sparked an interesting discussion among the panellists. Sabina said it was really important to not over-promise things. Andrew suggested it was possible to have a high energy, low carbon future, but also a low energy, high carbon future, and that the former should be pursued. Other panellists disagreed; Kate said it is necessary to reevaluate the need for continuous growth and consumption, and Greg highlighted the vast inefficiencies in the US energy system (66% energy losses), as well as the huge global inequalities to access to electricity with shocking statistics, including that in sub-Saharan Africa, the average energy consumption is 14GJ/capita/year, in comparison to the Roman Empire 2,000 years ago, when the average energy consumption was 20 GJ/capita/year. There was a consensus of a need to improve efficiencies in electricity production, and also to make electricity more accessible globally.

Then came several interesting questions from the audience, including ones about the importance of collaborating with the fission industry and the broader public. Panellists also discussed the huge progress that fusion has made since the last century.

Dr Aneeqa Khan said of the event: "All in all, I can honestly say that this was one of the most honest and engaging discussions I have heard about fusion. It was really thought-provoking to hear from such a broad and excellent range of speakers, all with very different perspectives, as well as the fabulous contributions from the audience. Going forward it is clear that we must collaborate technically and politically, being realistic about our challenges and failures, honest about timescales, clear on our mission to deliver energy and move away from being only scientific researchers.

"We need to work on resource supplies, specifically tritium and more broadly make sure that the technology is accessible to all, and simultaneously address existing inefficiencies and inequalities so that we don't simply perpetuate the unsustainable system we are living in. A tall order, but I think such discussions are the first steps in action, and I think this discussion highlighted how far fusion has come and how important it is for all of us from different backgrounds to talk with each other to make real changes and progress."

Watch a full recording of the event.

Turning fusion from a dream to reality: Panel discussion for Manchester Festival of Climate Action