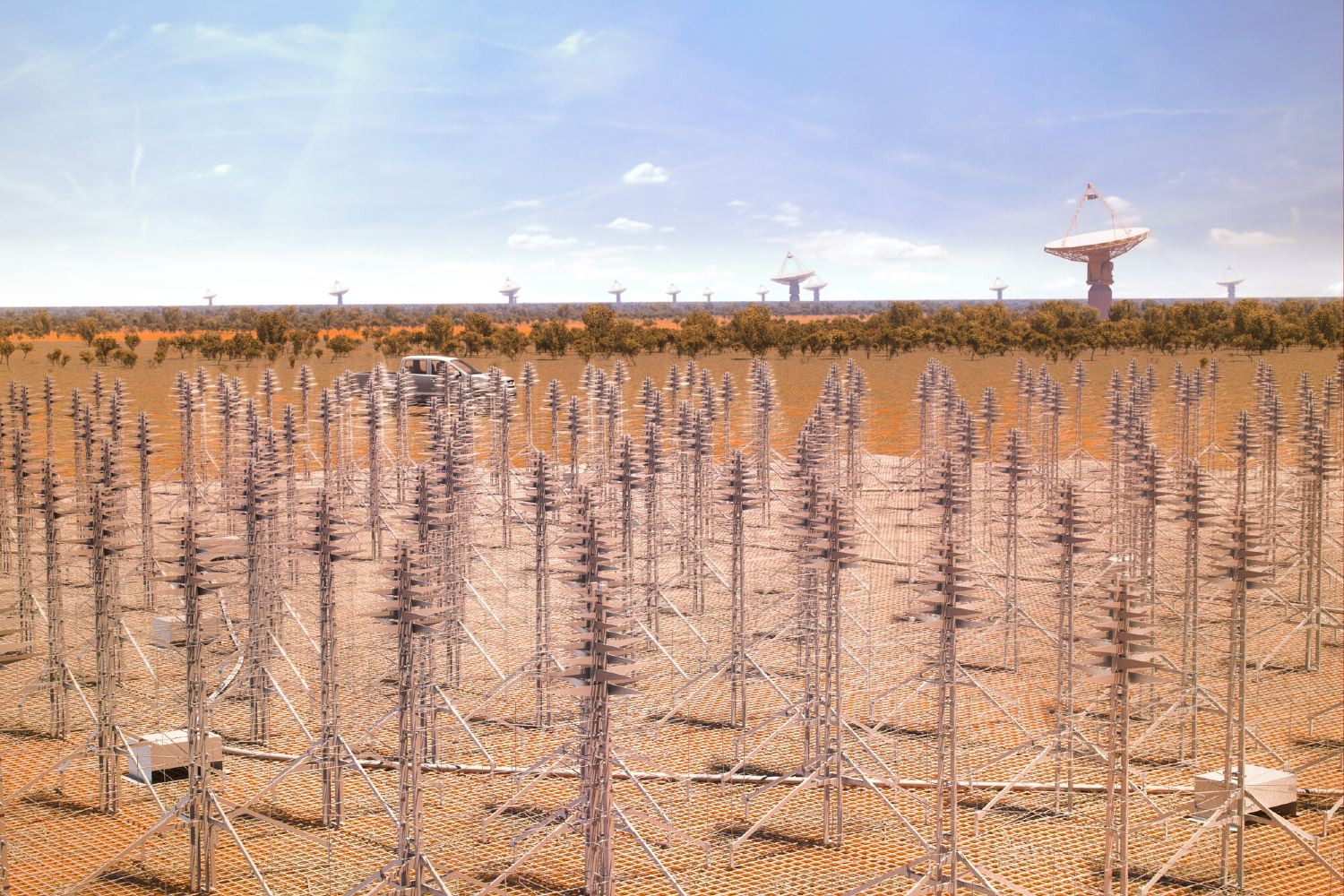 More than £15million has been awarded to UK institutions, including The University of Manchester, which are delivering the crucial software ‘brain’ of the world’s largest radio telescope.

The Square Kilometre Array Observatory (SKAO) is set to explore the evolution of the early Universe and delve into the role of some the earliest processes in fashioning galaxies like our own Milky Way, among many other science goals.

From its headquarters based at The University of Manchester’s Jodrell Bank Observatory in the UK, the SKAO will oversee the delivery and operations of two cutting-edge, complementary arrays with 197 radio telescope dishes located in South Africa and more than 130,000 low-frequency antennas in Western Australia.

Professor Ben Stappers leads the Manchester team developing the Pulsar Search software. This programme will enable some of the most exciting SKAO experiments, testing General Relativity and aiming to detect Gravitational Waves.

The University of Manchester will also lead the development of the software for the Monitor, Control and Calibration System of the SKA-LOW telescope. This telescope will be an array of over 130,000 antennas, which will, amongst other experiments, detect the very first stars to be born in the Universe.

It is no surprise that the UK’s outstanding scientists are playing such a vital role in shaping the future of this cutting-edge global observatory, backed by £15 million government funding.

As well as providing the foundation for new galaxy-level discoveries, this award will help to guarantee future contracts for UK industry, secure skilled jobs and develop a highly-transferrable technology in the UK – channelling more money back into the UK economy

Underpinning these incredible instruments is the thinking power of its software system, telling the telescopes where to look and when, diagnosing any issues and translating the telescope signals into useable data from which discoveries can be made.

The UK has already played a vital role in the software for the telescopes during the design phase, and is now set to continue leading this area as the telescopes are constructed.

Science Minister George Freeman said: “It is no surprise that the UK’s outstanding scientists are playing such a vital role in shaping the future of this cutting-edge global observatory, backed by £15 million government funding.

“As well as providing the foundation for new galaxy-level discoveries, this award will help to guarantee future contracts for UK industry, secure skilled jobs and develop a highly-transferrable technology in the UK – channelling more money back into the UK economy.

“This reflects the incredible skill of our science community, who are working hand-in-hand with industry to ensure the UK continues to grow as a global science superpower.”

The SKAO headquarters is based at Jodrell Bank, near Manchester, and its expansion was co-funded by the UK Government’s Department for Business, Energy and Industrial Strategy (BEIS), through STFC.

The UK government, through STFC, is the largest contributor to the SKAO and currently has a commitment to support 15% of the total cost of construction and initial operations from 2021 to 2030.

Professor Mark Thomson, Executive Chair of STFC and member of the SKAO Council, said: “The UK continues to play a leading role in the SKAO and the development of its telescopes.

“For any large scientific endeavour, the linchpin of its success lies in the infrastructure. Without the power to process and organise the vast amounts of information these telescopes will gather, we could not make the important discoveries.

“With the skills and expertise of our researchers and colleagues in industry, the UK will deliver the computing brain and nervous system of the telescopes to enable the observations and unlock the science.”

Building the next generation of telescopes

The SKAO recently received from its member states the go-ahead to start its construction phase, which is expected to be completed by the end of the decade, with the telescopes anticipated to operate for over 50 years.

As one of the largest scientific endeavours in history, the SKAO brings together more than 500 engineers and 1,000 scientists in more than 20 countries.

The telescopes will be able to survey the sky much faster than existing radio telescopes, and so will require powerful computing to ingest and process in real time the expected data rate of 8 terabits of data per second and to support the regional processing centres managing more than 700 petabytes a year.  At these challenging scales, high performance computing and software design are a cornerstone of the project.

Specialised cutting-edge software is being designed to control and monitor the telescope operations, and to allow detailed calibration and processing the huge amounts scientific data.

As well as utilising the expertise from UK’s research and academia, software development also relies on vital input from industry partners.

STFC’s Conrad Graham, UK project manager, said: “Involvement with the SKA project brings significant benefits for the UK, not just in terms of direct economic returns on investment, but also via innovation and technological spin offs, driven by the requirements of the project.

“The award of new contracts will provide opportunities for UK industry to engage with the project across all areas of SKA software design.

“As a result of the UK’s participation and the SKAO’s policy of fair work return, the UK is leading on seven high-value construction contracts, which will see the creation of significant new opportunities for UK industry.”