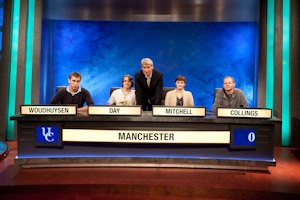 The University of Manchester is still on track to achieve an unprecedented third successive University Challenge title.

Manchester stormed into the quarter finals last night, with a convincing 325-110 win over Queens’ College, Cambridge.

It’s the ninth year in a row that Manchester has reached the quarter finals of the TV contest.

Manchester’s love affair with the TV show is largely due to long-serving coach Stephen Pearson, who has enjoyed considerable success with University Challenge having captained the team himself in 1996.  The media has already dubbed the modest librarian the ‘Alex Ferguson’ of the quiz world,

More than 120 universities enter the show every year, and it remains the UK’s longest-running quiz show. But Manchester’s history in the competition has not been without controversy – in 1975 the Manchester team staged a protest against what they saw as the show’s elitist bias towards Oxbridge, which allows separate colleges to enter. They answered ‘Marx’ or ‘Trotsky’ to everything.

The University of Manchester team will return to our screens in the New Year for their quarter final clash.