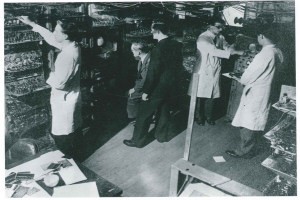 Sixty-five years ago today (Friday) a landmark development in the history of computing took place at The University of Manchester.

For on 21 June 1948, the Manchester Small Scale Experimental Machine – nicknamed ‘The Baby’ – became the first computer in the world to run a program electronically stored in its memory, rather than on paper tape or hardwired in.

The occasion has been described as the ‘birth of software’; it was the first implementation of the stored program concept that today underpins modern computing.

Developed by ‘Freddie’ Williams, Tom Kilburn and Geoff Tootill, The Baby was a test bed for the experimental Williams-Kilburn tube, a means of storing binary digits or ‘bits’ using a cathode ray tube.

“This was a big deal because, up to this point, computers had no cost-effective means of storing and flexibly accessing information in electronic form,” says Professor Simon Lavington, a research student in Kilburn’s team in Manchester between 1962 and 1965.

“The 1948 Baby marked the start of the ‘digital revolution’. Manchester played a leading role in this revolution, just as it did in the Industrial Revolution 200 years earlier."

The Baby was the first of a succession of Manchester computer innovations.  It inspired a long-running partnership between the University and Ferranti Ltd.  This partnership led to the Ferranti Mark 1, the world's first computer to be sold commercially in 1951, as well as to the UK's first supercomputer, the Ferranti Atlas in 1962, for a time the most powerful computer in the world.

To mark the Baby's 65th anniversary, Google has produced a short film telling the story, including archive footage and interviews with some of Manchester's early computing pioneers.  While today nothing remains of the original Baby, a working replica is on display at the Museum of Science and Industry (Mosi) in Manchester.

Professor Lavington adds: “The greatest problem facing all the early computer design groups was how to devise a suitable memory, or storage, system. The University of Manchester was the first to get its storage system working at electronic speeds – it was the first RAM or random-access memory.

"The partnership between the University and Ferranti Ltd, inspired by the Baby, went on to produce much of the UK's total computing power up to the mid-1960s.”

Images to accompany this press release are available on request.