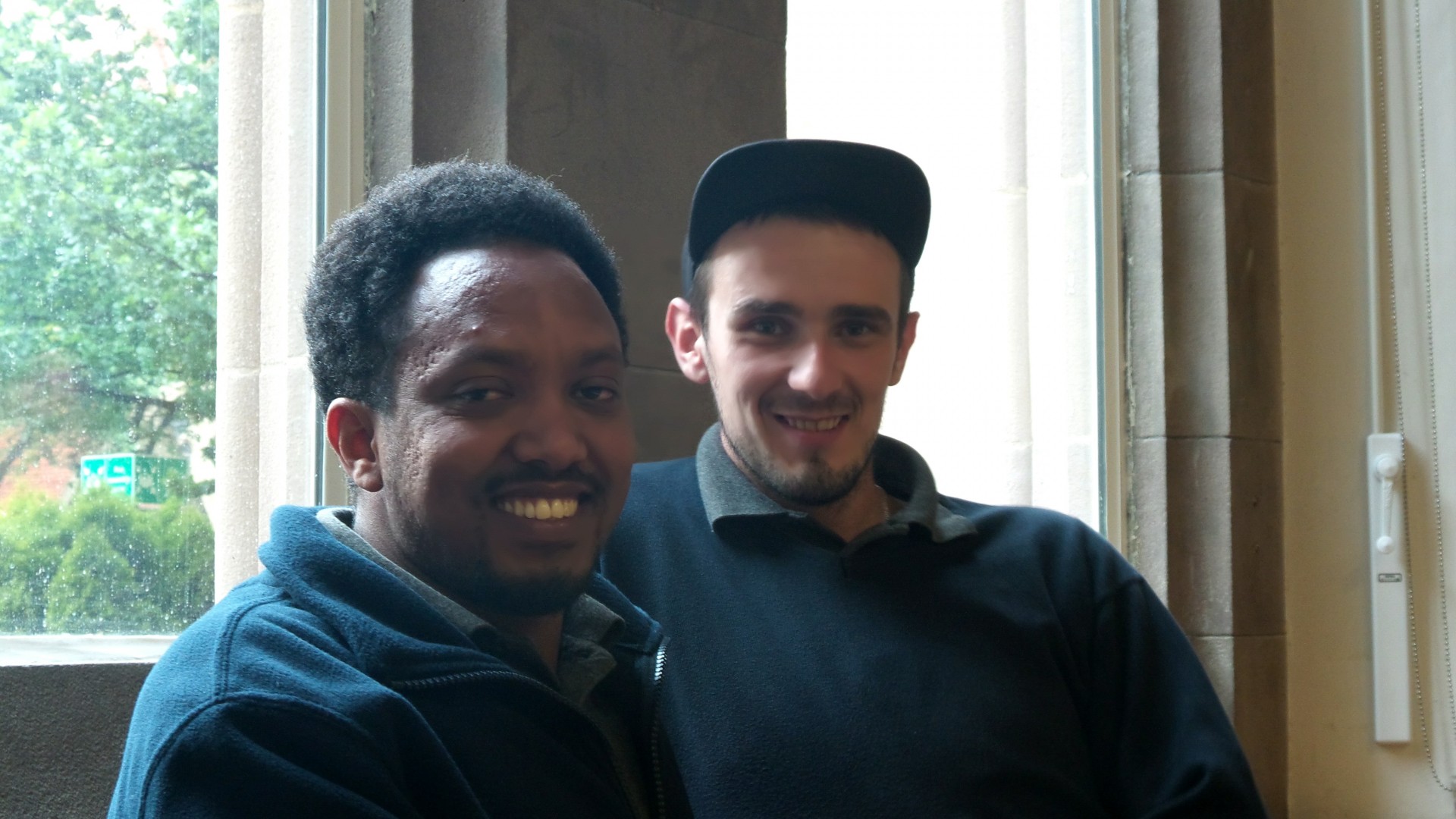 Two people who have experienced homelessness are celebrating after finding work at The University of Manchester, as it honours its pledge to the city’s Homelessness Charter.

In November 2016, The University of Manchester pledged its support for the Manchester Homelessness Charter. The Charter outlines the principles that establish how people who experience homelessness should be treated, and how the city intends to deal with the issue. It calls for those who have adopted the charter to demonstrate their support with a pledge to take action.

A significant component of the University’s pledge is to support organisations directly concerned with addressing homelessness to develop pathways into employment for people with experience of homelessness.

Frezghi Teklemichael is 29 and came to the UK as an asylum seeker from Eritrea where he had been a teacher. Having successfully applied for asylum he became homeless when financial support from the National Asylum Support Service ended.

In March 2017 Frezghi had been unemployed for three-and-a-half years and was living in a hostel in Rochdale when he was referred to The Works, The University of Manchester’s employment programme, by Ready for Work.

Frezghi was enrolled on one of The Works’ pre-recruitment training programmes which are designed to equip people with the skills and qualifications required for some roles at the University.

Having successfully completed the training programme in April 2017, he was appointed to the role of Building Attendant in the University’s Estates and Facilities Directorate.

Frezghi said: “The University is a great place to work and I have been made to feel very welcome. I am developing new skills and beginning to focus on my long-term career goals here in the UK. It is so good to be in work and contributing to my new country.”

Chris Gopal, from Ready for Work, who chairs the Homelessness Charter Employment Action Groups, said: “Frezghi’s achievement dispels the myth that people who have experienced homelessness are unable or unwilling to work. Our collaboration with the committed organisations like The University of Manchester demonstrates that partnering with employers is key to the development of pathways into work allowing people to stabilise their lives and become active, fulfilled members of society.”

John is 23 and from Ancoats. He had been unemployed for over 12 months and was living in the homeless tent community in Manchester. Working with DePaul UK he has made amazing progress in turning his life around and also joined the House Services Academy.

He said: “The University of Manchester not only gave me training with a job at the end, it is actually going to change my life. I was really nervous at first but they helped me build my confidence on the course and helped me to re-engage with the world of work which has helped me a lot. Since being here I have made some great new friends, and I can actually pay my own way. I am now looking to get my own accommodation with my partner. I’m very happy about starting work!”

Peter Morgan from DePaul UK said: “The progression of these young people illustrates the commitment of The University of Manchester who have kept to their promises to create opportunities for some of the most socially excluded people in our city. Effort by employers such as the University helps charities like DePaul UK to deliver the best possible outcomes for the young people we support impacting on the individuals, their families and wider communities.”

Steve Grant, Assistant Director of HR at the University said: “The University is committed to doing all that it can to fulfil its pledge to support the Manchester Homelessness Charter and we have worked with ‘Ready for Work’ for several years on other initiatives.

“The achievements of Frezghi and John illustrate that, with some support, it is possible for people who have experienced homelessness and other barriers to address the challenges they have faced and carve a new path for themselves.

“Employers in all sectors and of all sizes across Greater Manchester have a key role to play in addressing homelessness and other barriers through simple actions, whether it’s providing work experience, helping someone prepare for an interview or offering a job.”

I am developing new skills and beginning to focus on my long-term career goals here in the UK. It is so good to be in work and contributing to my new country