The University of Manchester’s Centre for New Writing (CNW) is celebrating the success of the 2019 Manchester Literature Festival, which has drawn to a close after over two weeks of exciting events marking the city’s contribution to literature. 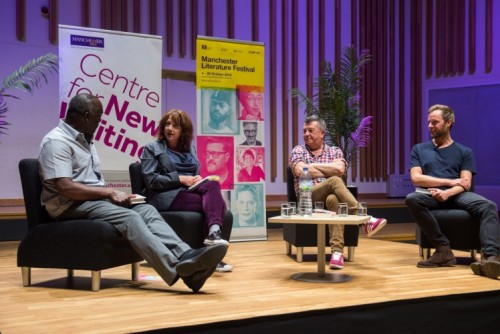 The CNW is a proud co-host and co-curator of the Festival, overseeing activities such as the official launch at the Radisson Blu Edwardian Hotel, where Professor of New Writing Jeanette Winterson addressed attendees, who were treated to a live poetry reading by Hafsah Aneela Bashir.

Poetry is central to the CNW’s mission, with several poetry events peppering the Festival programme. On October 7, there was an intimate reading at Blackwell’s bookshop with two poets whose 2019 debut collections were both shortlisted for this year’s Forward Prize for Best First Collection, Isabel Galleymore and Stephen Sexton. On 21 October, three internationally-acclaimed poets read from their latest works at the Martin Harris Centre. Ilya Kaminsky and Karen Solie read from Deaf Republic and The Caiplie Caves respectively, while Vona Groarke launched her new collection, Double Negative.

This year’s outing of the Festival also welcomed some of the world’s foremost novelists to Manchester. At the Martin Harris Centre on 4 October author David Nicholls (One Day, Us, Starter for Ten) discussed his new novel Sweet Sorrow. The following day, Jeanette Winterson performed an entertaining one-woman show at the Royal Northern College of Music, based on her latest novel Frankissstein - a 21st-century response to Mary Shelley’s classic text - which was longlisted for the Booker Prize. 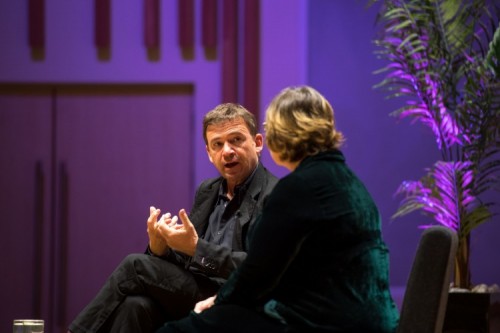 On 10 October Elif Shafak explored the themes of his Booker Prize-shortlisted 10 Minutes 38 Seconds in this Strange World, while the Martin Harris Centre hosted a panel event of shortlisted authors: Lucy Ellman (Ducks, Newbury Port), Chigozie Obioma (An Orchestra of Minorities), and the eventual joint winner for Girl, Woman, Other, Bernardine Evaristo.

The CNW partnered on three events exploring real-world issues. At the Martin Harris Centre on 5 October, Lisa Blower, Stuart Maconie, Adam Sharp and Alex Wheatle explored experiences of being working class in the literary industry and the hugely successful Common People anthology. Jonathan Safran Foer provided a fascinating insight into how simple changes such as what we eat for breakfast can have a profound impact on efforts to save the planet at the Martin Harris Centre on 8 October, based on his latest work We Are the Weather. Furthermore, David Nott, the world’s most experienced trauma surgeon, appeared at the Royal Northern College of Music on 9 October to reflect on his career, from learning to perform an emergency caesarean section in Kabul to amputating an arm in the Democratic Republic of Congo, following instructions sent via text.

Finally, the CNW presented a rare public event at the Martin Harris Centre with Hanif Kureishi. Hanif joined journalist Anita Sethi to discuss his award-winning fiction, iconic screenplays such as My Beautiful Laundrette, and his forthcoming book What Happened?, a collection of essays and fiction providing witty observations of popular and classical culture.

Fortunately, for those affected by the post-festival blues, there will be a final event featuring Val McDermid and Denise Mina on Saturday 30 November. These two queens of crime fiction will discuss their brilliant new novels, How the Dead Speak and In Conviction. Tickets can be bought via QuayTickets online or via telephone.

“Manchester Literature Festival showcases Manchester’s rich literary heritage and reflects the city’s reputation as a place where people can come together to share ideas. We are proud to be the festival’s official higher education partner and are already looking forward to what MLF 2020 will bring,” said John McAuliffe, Director, Centre for New Writing.