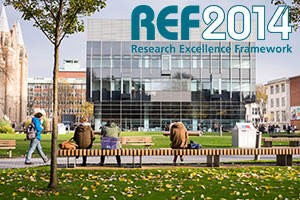 The University of Manchester’s place as one of the UK’s top research universities is confirmed in the results of the independent Research Excellence Framework (REF) published today (Thursday, 18 December 2014).

The University of Manchester had one of the broadest submissions of any university in the UK, with research evaluated in 35 discipline areas.

The REF exercise also recognised The University of Manchester’s excellent research environment and how its research is having a genuine influence on the real lives of people as evidenced by a series of “impact case studies”, from new drugs and inventions to public policy.

Professor Dame Nancy Rothwell, President and Vice-Chancellor of The University of Manchester, said: “These results confirm Manchester’s place as one of only a handful of the UK’s leading research universities across a wide range of subjects, but also as a university with a commitment to making a real difference to society and the world we live in.

“The REF results show that we have sustained the research performance that we demonstrated following the merger of UMIST and the Victoria University of Manchester in 2004 and that we have emerged as a bona fide world-leader in a number of subjects.

“We are committed to using this very sound base for further improvement so that we can reach our goal of becoming one of the top 25 universities in the world by 2020.”

Manchester is now one of a small number of UK universities with an internationally significant research profile over a very wide range of subjects. The scale and diversity of our submission confirms Manchester’s status as a genuine research powerhouse.

Research quality is assessed every few years by the Higher Education Funding Councils to allocate research funding and to provide information on the quality of the research in UK universities.